P0057 (S0063). - Does the Method of Biopsy (Percutaneous, Endoscopic, or Surgical) in Patients With Pancreatic Cancer Differ by Insurance Status? 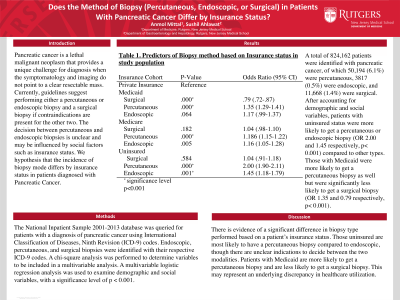 Introduction: Pancreatic cancer is a lethal malignant neoplasm that provides a unique challenge for diagnosis when the symptomatology and imaging do not point to a clear resectable mass. Currently, guidelines suggest performing either a percutaneous or endoscopic biopsy and a surgical biopsy if contraindications are present for the other two. The decision between percutaneous and endoscopic biopsies is unclear and may be influenced by social factors such as insurance status.  We hypothesis that the incidence of biopsy mode differs by insurance status in patients diagnosed with Pancreatic Cancer.

Methods: The National Inpatient Sample 2001-2013 database was queried for patients with a diagnosis of pancreatic cancer using International Classification of Diseases, Ninth Revision (ICD-9) codes. Endoscopic, percutaneous, and surgical biopsies were identified with their respective ICD-9 codes. A chi-square analysis was performed to determine variables to be included in a multivariable analysis. A multivariable logistic regression analysis was used to examine demographic and social variables, with a significance level of p < 0.001.

Discussion: There is evidence of a significant difference in biopsy type performed based on a patient’s insurance status. Those uninsured are most likely to have a percutaneous biopsy compared to endoscopic, though there are unclear indications to decide between the two modalities. Patients with Medicaid are more likely to get a percutaneous biopsy and are less likely to get a surgical biopsy. This may represent an underlying discrepancy in healthcare utilization.

Table 1. Predictors of Biopsy method based on Insurance status in the study population