P0411 (S0192). - Does the Incidence of Red Flag Symptoms and Concurrent Colonoscopies in Patients With Irritable Bowel Syndrome Differ by Insurance Status? 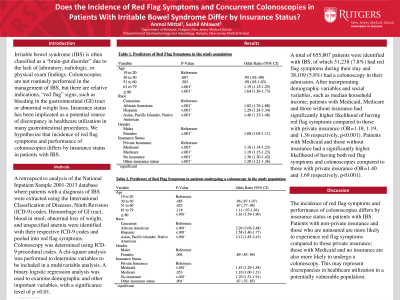 Introduction: Irritable bowel syndrome (IBS) is often classified as a “brain-gut disorder” due to the lack of laboratory, radiologic, or physical exam findings. Colonoscopies are not routinely performed in the management of IBS, but there are relative indications, “red flag” signs, such as bleeding in the gastrointestinal (GI) tract or abnormal weight loss. Insurance status has been implicated as a potential source of discrepancy in healthcare utilization in many gastrointestinal procedures. We hypothesize that the incidence of red flag symptoms and performance of colonoscopies differs by insurance status in patients with IBS.

Methods: The National Inpatient Sample 2001-2013 database was queried for patients with a diagnosis of IBS using International Classification of Diseases, Ninth Revision (ICD-9) codes. Hemorrhage of GI tract, blood in the stool, abnormal loss of weight, and unspecified anemia were identified with their respective ICD-9 codes and pooled into red flag symptoms. Colonoscopy was determined using ICD-9 procedural codes. A chi-square analysis was performed to determine variables to be included in a multivariable analysis. A binary logistic regression analysis was used to examine demographic and other important variables, with a significance level of p < 0.001.

Discussion: The incidence of red flag symptoms and performance of colonoscopies differs by insurance status in patients with IBS. Patients with non-private insurance and those who are uninsured are more likely to experience red flag symptoms compared to those privately insured; those with Medicaid and no insurance are also more likely to undergo a colonoscopy. This may represent discrepancies in healthcare utilization in a potentially vulnerable population. Table 1. Predictors of Red Flag Symptoms in the study population Table 2. Predictors of Red Flag Symptoms in patients undergoing a colonoscopy in the study population