P1027 (S1976). - Stuck in a Black Hole: A Case of Acute Esophageal Necrosis Presenting as Dysphagia and Odynophagia 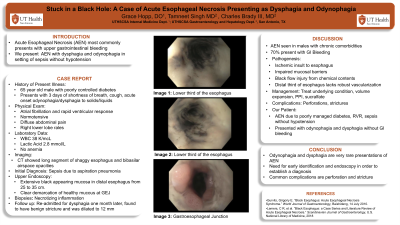 Introduction: Acute esophageal necrosis (AEN) is a rare entity that most commonly presents with upper gastrointestinal (GI) bleeding. We present a rare case of AEN presenting as dysphagia and odynophagia in the setting of sepsis without hypotension.

Methods: A 65 year old male with poorly controlled diabetes mellitus presented with 3 days of shortness of breath, cough and acute onset of odynophagia and dysphagia to both solids and liquids. On exam, he was noted to be in atrial fibrillation with rapid ventricular response (RVR) and normotensive with diffuse abdominal pain and right lower lobe rales. CT revealed a long segment of esophagus with a shaggy appearance and bibasilar airspace opacities. Laboratory data revealed a leukocytosis of 38 K/mcL, a lactic acid of 2.8 mmol/L in the absence of anemia.
His sepsis was due to aspiration pneumonia. Endoscopy revealed extensive black appearing mucosa in the distal esophagus, from 25cm to 35cm. There was a clear demarcation at the gastroesophageal junction, with healthy appearing gastric mucosa distally. Random esophageal biopsies demonstrated necrotizing inflammation. One month later, the patient was readmitted for dysphagia and a repeat upper endoscopy demonstrated a benign appearing stricture, measured to be 7 mm in diameter at 33cm. He was dilated to 12mm with improvement in his symptoms.

Discussion: AEN is seen in males with chronic comorbidities. Over 70% of cases present with upper GI bleeding. While the pathogenesis is unclear, current literature hypothesizes that a combination of ischemic insult to the esophagus, impaired mucosal barriers and a back flow injury from the chemical contents of the stomach play a role. Due to a lack of robust vascularization, the distal third of the esophagus is often implicated. Biopsies demonstrate severe necrosis of the mucosa and submucosa. Management of AEN consists of treatment of the underlying condition, volume expansion, proton pump inhibitor therapy and sucralfate.
In this case, the patient likely developed AEN due to a variety of reasons including poorly managed diabetes, RVR and sepsis remarkably in the absence of hypotension. This is the first documented case of AEN presenting with odynophagia/dysphagia without GI bleeding. This case highlights the importance of early identification and endoscopy in order to establish a diagnosis and prevent a delay in treatment to avoid the common complications of perforation and stricture, as demonstrated in our patient.

Image 1: Necrotic tissue visualized during endoscopy in the lower third of the esophagus

Image 2: Necrotic tissue visualized during endoscopy in the lower third of the esophagus

Image 3: Visualization of the clear demarcation at the gastroesophageal junction, with healthy appearing gastric mucosa distally.