P0467 (S0248). - Mucosal Association of Clostridioides difficile in the Colon May Play a Role in Infection Recurrence 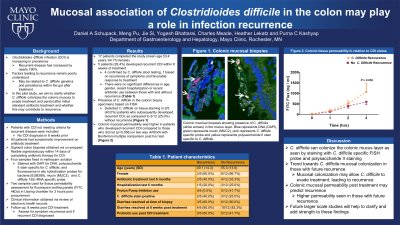 Introduction: Clostridioides difficile infection (CDI) is increasing in prevalence and recurrent disease has increased by nearly 190%. Factors leading to recurrence remain poorly understood and may be related to C. difficile genetics and persistence within the gut after treatment. In this pilot study, we aim to clarify whether C. difficile colonizes the colonic mucosa to evade treatment and persist after initial standard antibiotic treatment and whether this may contribute to recurrence.

Methods: All human studies were approved by institutional IRB. Patients with recent CDI underwent flexible sigmoidoscopy to obtain sigmoid colon biopsies within 2 weeks of completing antibiotic therapy for CDI. Those already with recurrent CDI were excluded. Samples were fixed in methacarn solution and then stained with DAPI for DNA, and fluorescence in situ hybridization probes for bacteria (EUB388), mucin (MUC2) and a C. difficile 16S rRNA specific probe. Tissue permeability for fluorescein isothiocyanate (FITC 4kDa) was assessed in an Ussing chamber for 4 hours post procurement. Clinical information was obtained by review of electronic health records. Patients were contacted 8 weeks post CDI treatment to determine if recurrent CDI developed.

Results: 14 patients completed the study (mean age 55.8 years, 64.3% female). 4 patients (28.6%) developed recurrent CDI (3 confirmed by C. difficile stool testing, 1 based on recurrence of symptoms and favorable response to treatment) within 8 weeks of treatment. There were no significant differences in age, gender, recent hospitalization or recent antibiotic use between those with and without recurrence (Figure 1). We assessed the presence of C. difficile in the colonic biopsy specimens using FISH and detected C. difficile on tissue staining in 2/4 (50.0%) patients who subsequently developed recurrent CDI, as compared to 3/10 (30.0%) without recurrence (Figure 2). C. difficile carrier status was assessed in biopsies from healthy patients with no CDI history and was found in 4/15 (26.7%). Colonic mucosal permeability was higher in patients who developed recurrent CDI compared to those who did not (p=0.028 on mixed-model two way ANOVA with Sidak’s multiple comparison post hoc test; Figure 3). 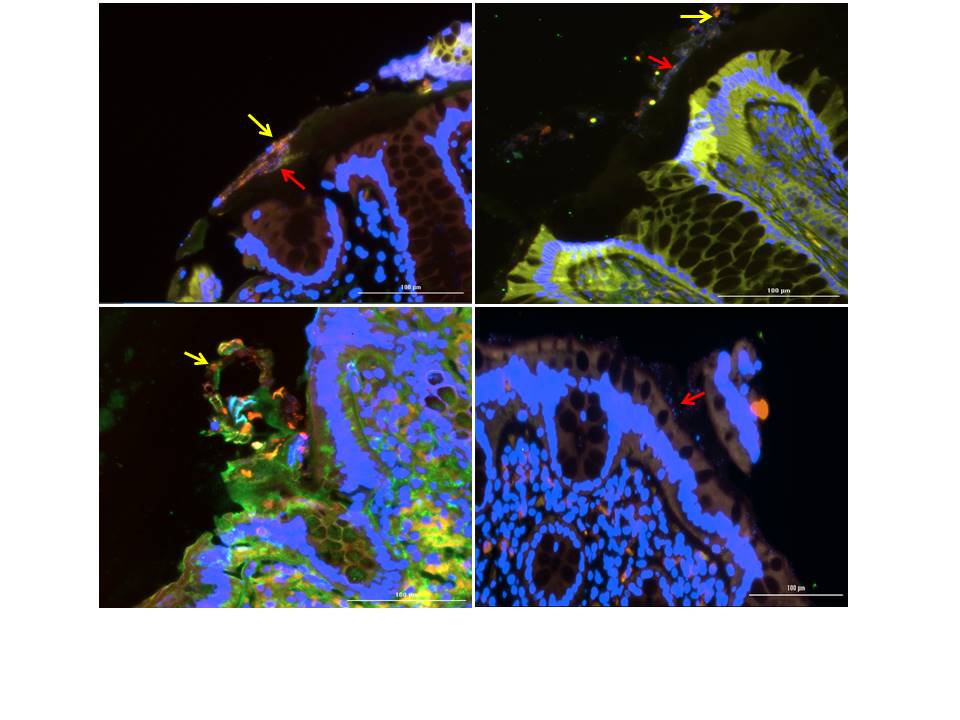