P0957 (S1906). - An Esophageal Stricture in a Patient With Epidermolysis Bullosa Acquisita 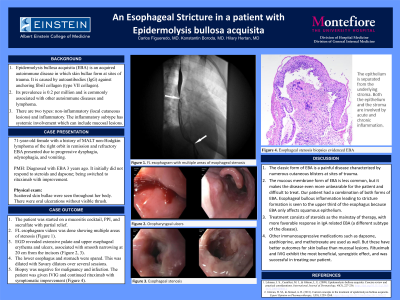 Introduction: Epidermolysis bullosa acquisita (EBA) is an acquired autoimmune disease in which skin bullae form at sites of trauma. It is caused by autoantibodies (IgG) against anchoring fibril collagen (type VII collagen). Its prevalence is 0.2 per million and is commonly associated with other autoimmune diseases and lymphoma. There are two types: non-inflammatory (local cutaneous lesions) and inflammatory. The inflammatory subtype has systemic involvement which can include mucosal lesions. We present a rare case of EBA with refractory mucosal involvement causing esophageal strictures.

Methods: A 71-year-old female with a history of MALT non-Hodgkin lymphoma of the right orbit in remission and refractory EBA presented due to progressive dysphagia, odynophagia, and vomiting. She had EBA for 3 years, it initially did not respond to steroids and dapsone; so she was switched to rituximab with improvement.
On physical exam, scattered skin bullae were seen throughout her body. There were oral ulcerations without visible thrush. The patient was started on a mucositis cocktail, PPI, and sucralfate with partial relief. EGD revealed extensive palate and upper esophageal erythema and ulcers, associated with smooth narrowing at 20 cm from the incisors (Figures 1 and 2). The lower esophagus and stomach were spared. This was dilated with Savary dilators over several sessions. Biopsy was negative for malignancy and infection. The patient was given IVIG and continued rituximab with symptomatic improvement.

Discussion: The classic form of EBA is a painful disease characterized by numerous cutaneous blisters at sites of trauma. The mucous membrane form of EBA is less common, but it makes the disease even more unbearable for the patient and difficult to treat. Our patient had a combination of both forms of EBA. Esophageal bullous inflammation leading to stricture formation is seen to the upper third of the esophagus because EBA only affects squamous epithelium.
Treatment consists of steroids as the mainstay of therapy, with a more favorable response in IgA related EBA (a different subtype of the disease). Other immunosuppressive medications such as dapsone, azathioprine, and methotrexate are used as well. But these have better outcomes for skin bullae than mucosal lesions. Rituximab and IVIG exhibit the most beneficial, synergistic effect, and was successful in treating our patient.

Figure 1. Blood with ulceration throughout the oropharynx.