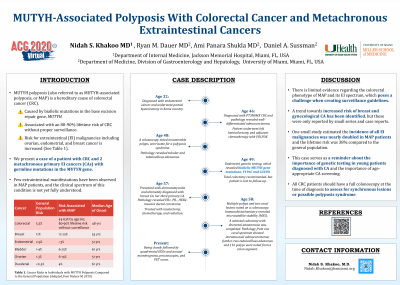 Introduction: MUTYH-associated polyposis (MAP) is a hereditary cause of colorectal cancer (CRC). Without surveillance, patients with MAP have an 80-90% lifetime risk of CRC. We present a case of a patient with CRC and 2 metachronous primary extraintestinal (EI) cancers (CAs) with germline mutations in the MUTYH gene.

Methods: Our patient was diagnosed with endometrial CA at age 33 and underwent a hysterectomy. She was diagnosed with CRC fourteen years later and underwent a left hemicolectomy with chemotherapy. It is unclear if she had a full colonoscopy at that time. Two years later, a surveillance colonoscopy revealed many tubulovillous adenomas, and a repeat procedure six months later noted innumerable polyps. She then underwent genetic testing which was negative for Lynch syndrome, but revealed biallelic MUTYH gene mutations, Y179C and G396D. A total colectomy was recommended, but she was lost to follow-up. Eight years later, she was diagnosed with breast CA, a third primary CA. She achieved remission with mastectomy, chemotherapy, and radiation. That year, an EGD was normal, and a colonoscopy revealed multiple rectal hyperplastic polyps. A year later, two cecal masses were found and the biopsy showed villous adenoma with high-grade dysplasia. Subsequently, she underwent a subtotal colectomy with ileorectal anastomosis.

Discussion: There is limited evidence regarding the colorectal phenotype of MAP and its EI spectrum, which poses a challenge when creating surveillance guidelines. Current guidelines only outline targeted surveillance for CRC, gastric polyps, and duodenal polyps. A trend towards an increased risk of breast and gynecological CAs has been identified, but these findings were only reported by small series and case reports. One small study estimated the incidence of all EI malignancies was nearly doubled in MAP patients and the lifetime risk was 38% compared to the general population. This case serves as a prudent reminder about the importance of genetic testing in patients with CA diagnosed at a young age and the importance of age-appropriate screening for other CAs. Further, all CRC patients should have a full colonoscopy at the time of diagnosis to assess for synchronous lesions or possible polyposis syndrome.