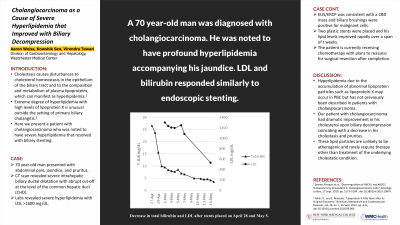 Introduction: Cholestasis causes disturbances to cholesterol homeostasis in the epithelium of the biliary tract and also to the composition and metabolism of plasma lipoproteins, which can manifest as hyperlipidemia. However extreme degree of hyperlipidemia with high levels of lipoprotein-X is unusual outside the setting of primary biliary cholangitis.  We present a patient with cholangiocarcinoma (CCA) who was noted to have severe hyperlipidemia that resolved with biliary stenting.

Methods: A 70 year-old man with a past medical history of hypertension and diabetes mellitus presented with abdominal pain, jaundice, and pruritus. Computed tomography (CT) scan revealed severe intrahepatic biliary ductal dilatation with abrupt cut-off at the level of the common hepatic duct (CHD). In addition to markedly elevated liver tests with a total bilirubin of 26.2 mg/dL, his labs revealed severe hyperlipidemia with low-density lipoprotein (LDL) >1600 mg/dL. The patient underwent endoscopic ultrasound (EUS)/endoscopic retrograde cholangiopancreatography (ERCP) and was found to have two distinct biliary strictures, one at the distal common bile duct (CBD) and another at the CHD, without any pancreatic mass. A plastic biliary stent was placed. Biliary brushings were positive for malignant cells and the patient was deemed fit for surgical resection based on imaging criteria. Endocrinology was consulted to optimize lipids and for consideration of plasmapheresis prior to surgery. A lipoprotein electrophoresis was sent to confirm the diagnosis. The patient subsequently underwent cardiac work-up, including stress testing, which was normal. He required an additional plastic stent placement 7 days after the initial ERCP and his lipid levels improved rapidly with biliary stenting over a span of 2 weeks. Later at exploratory laparotomy, his disease was found to be more extensive and unsuitable for complete resection. The patient is currently receiving chemotherapy and is in stable condition with plans to reassess for resection following treatment.

Discussion: Hyperlipidemia may occur in the setting of cholestasis and is often secondary to the accumulation of abnormal lipoprotein particles such as lipoprotein-X. Such particles are unlikely to be atherogenic and seldom require therapy other than treatment of the underlying cholestatic condition. In our case, a patient with cholangiocarcinoma had dramatic improvement in his cholesterol upon biliary decompression coinciding with a decrease in his cholestasis and pruritus. Decrease in total bilirubin and LDL after stents placed on April 28 and May 5.