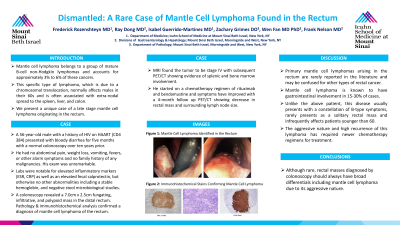 Introduction: Mantle cell lymphoma belongs to a group of mature B-cell non-Hodgkin lymphomas and accounts for approximately 3% to 6% of these cancers. This specific type of lymphoma, which is due to a chromosomal translocation, normally affects males in their 60s and is often associated with extra-nodal spread to the spleen, liver, and colon. Primary mantle cell lymphomas arising in the rectum are rarely reported in the literature and may be confused for other types of rectal cancer. We present a unique case of a late stage mantle cell lymphoma originating in the rectum.

Methods: A 56-year-old male with a history of HIV on HAART (CD4 384) presented to the clinic with complaints of bloody diarrhea for the past five months with a normal colonoscopy over ten years prior. He had no abdominal pain, weight loss, vomiting, fevers, or other alarming symptoms and no family history of any malignancies. His physical exam was otherwise unremarkable. Labs were notable for mildly elevated inflammatory markers (ESR, CRP) as well as an elevated fecal calprotectin, but otherwise no other abnormalities including a stable hemoglobin, and negative stool microbiological studies. A colonoscopy revealed a 7.0cm x 2.5cm fungating, infiltrative and polypoid mass in the distal rectum. Subsequent pathology and immunohistochemical analysis confirmed a diagnosis of mantle cell lymphoma of the rectum. The patient underwent an MRI which found the tumor to be stage IV with subsequent PET/CT showing evidence of splenic and bone marrow involvement. He was ultimately started on a chemotherapy regimen of rituximab and bendamustine. His rectal bleeding has improved since starting chemotherapy, and a 4-month follow up PET/CT shows decrease in rectal mass and surrounding lymph node size.

Discussion: Mantle cell lymphoma is known to have gastrointestinal involvement in 15-30% of cases. Unlike the above patient, this disease usually presents with a constellation of B-type symptoms, rarely presents as a solitary rectal mass and infrequently affects patients younger than 60. The aggressive nature and high recurrence of this lymphoma has required newer chemotherapy regimens for treatment. Therefore, although rare, rectal masses diagnosed by colonoscopy should always have broad differentials including mantle cell lymphoma due to its aggressive nature.

Mass Identified in the Rectum and Diagnosed as Mantle Cell Lymphoma 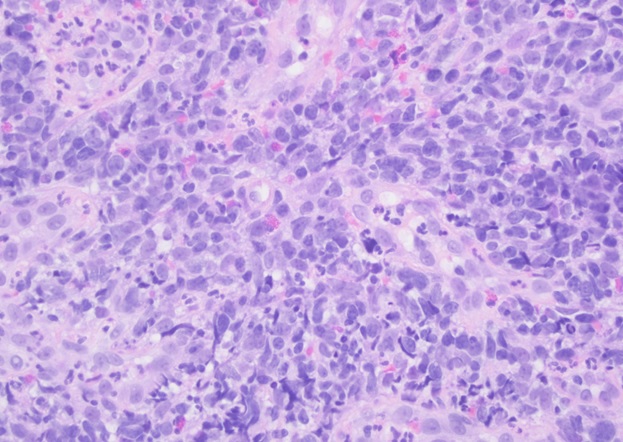