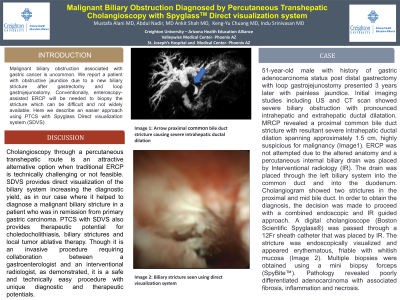 Introduction: Malignant biliary obstruction associated with gastric cancer is uncommon. We report a patient with obstructive jaundice due to a new biliary stricture after gastrectomy and loop gastrojejunostomy. Conventionally, enteroscopy-assisted ERCP will be needed to biopsy the stricture which can be difficult and not widely available. Here we describe an easier approach using Percutaneous Transhepatic Cholangioscopy (PTCS) with SpyglassTM Direct visualization system (SDVS).

Methods: 51-year-old male with history of gastric adenocarcinoma status post distal gastrectomy with loop gastrojejunostomy presented 3 years later with painless jaundice. Initial imaging studies including US and CT scan showed severe biliary obstruction with pronounced intrahepatic and extrahepatic ductal dilatation. MRCP revealed a proximal common bile duct stricture with resultant severe intrahepatic ductal dilation spanning approximately 1.5 cm, highly suspicious for malignancy (Image1). ERCP was not attempted due to the altered anatomy and a percutaneous internal biliary drain was placed by Interventional radiology (IR). The drain was placed through the left biliary system into the common duct and into the duodenum. Cholangiogram showed two strictures in the proximal and mid bile duct. In order to obtain the diagnosis, the decision was made to proceed with a combined endoscopic and IR guided approach. A digital cholangioscope was passed through a 12Fr sheath catheter that was placed by IR. The stricture was endoscopically visualized and appeared erythematous, friable with whitish mucosa (Image 2). Multiple biopsies were obtained using a mini biopsy forceps. Pathology revealed poorly differentiated adenocarcinoma with associated fibrosis, inflammation and necrosis.

Discussion: Cholangioscopy through a percutaneous transhepatic route is an attractive alternative option when traditional ERCP is technically challenging or not feasible. SDVS provides direct visualization of the biliary system increasing the diagnostic yield, as in our case where it helped to diagnose a malignant biliary stricture in a patient who was in remission from primary gastric carcinoma. PTCS with SDVS also provides therapeutic potential for choledocholithiasis, biliary strictures and local tumor ablative therapy. Though it is an invasive procedure requiring collaboration between a gastroenterologist and an interventional radiologist, as demonstrated, it is a safe and technically easy procedure with unique diagnostic and therapeutic potentials. 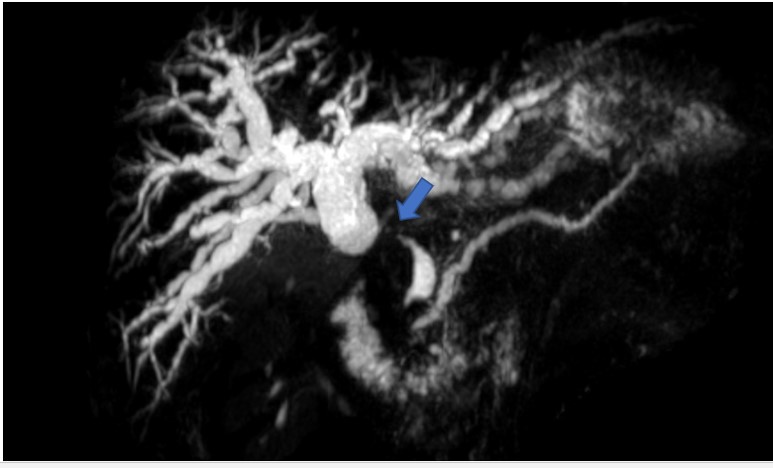 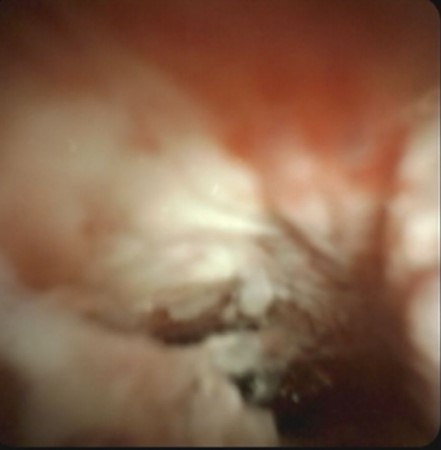