P0449 (S0230). - Lack of Association Between the Presence of Adenoma and Body Mass Index in African Americans as Compared to Non-AA 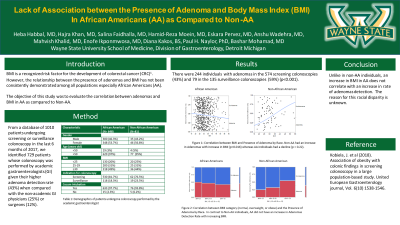 Introduction: Increased body mass index (BMI) is a recognized risk factor for the development of colo-rectal cancer (CRC). Although the incidence of adenoma clearly correlates with risk of CRC, the relationship between the presence of adenomas and BMI has not been consistently demonstrated among all populations especially African Americans (AA). The objective of this study was to evaluate the correlation between adenomas and BMI in AA as compared to Non-AA.

Discussion: Unlike in non-AA individuals, an increase in BMI in AA individuals does not correlate with the detection of adenoma’s on colonoscopy. In contrast to most of the literature, this study reduces the role of variation in endoscopists by using the high adenoma detection rate academic GI physicians and a homogeneous population with respect to gender and age. The reason that BMI does not correlate with the detection of adenomas in AA patients is not known.

Figure 1 Correlation between BMI and Presence of Adenoma by Race. Non-AA had an increase in Adenomas with increase in BMI whereas AA individuals had a decline.

Figure 2 Correlation between BMI category (normal, overweight or obese) and the Presence of Adenoma by Race. In contrast to Non-AA individuals, AA did not have an increase in Adenomas Detection Rate with increasing BMI.