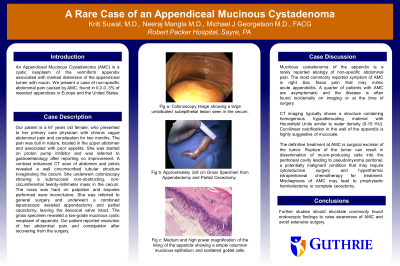 Introduction: An Appendiceal Mucinous Cystadenoma (AMC) is a cystic neoplasm of the vermiform appendix associated with marked distension of the appendiceal lumen with mucin. We present a case of non-specific abdominal pain caused by AMC, found in 0.2-0.3% of resected appendices in Europe and the United States.

Methods: Our patient is a 67 year old female, who presented to her primary care physician with chronic vague abdominal pain and constipation for two months. The pain was dull in nature, located in the upper abdomen and associated with poor appetite. She was started on a proton pump inhibitor and was referred to gastroenterology after reporting no improvement. A contrast enhanced CT scan of abdomen and pelvis revealed a well circumscribed tubular structure invaginating the cecum. She underwent a colonoscopy showing a submucosal non-obstructing, non-circumferential twenty millimeter mass in the cecum. The mass was hard on palpation and biopsies performed were inconclusive. She was referred to general surgery and underwent a combined laparoscopic assisted appendectomy and partial cecectomy, leaving the ileocecal valve intact. The gross specimen revealed a low-grade mucinous cystic neoplasm of appendix. Our patient reported resolution of her abdominal pain and constipation after recovering from surgery.

Discussion: Mucinous cystadenoma of the appendix is a rarely reported etiology of non-specific abdominal pain. The most commonly reported symptom of AMC is right iliac fossa pain that may mimic acute appendicitis. A quarter of patients with AMC are asymptomatic and the disease is often found incidentally on imaging or at the time of surgery.
CT imaging typically shows a structure containing homogenous hypoattenuating material with Hounsfield Units similar to water density (0-15 HU). Curvilinear calcification in the wall of the appendix is highly suggestive of a mucocele.
The definitive treatment of AMC is surgical excision of the tumor. Rupture of the tumor can result in dissemination of mucin-producing cells into the peritoneal cavity leading to pseudomyxoma peritonei, a potentially malignant condition that may require cytoreductive surgery and hyperthermic intraperitoneal chemotherapy for treatment. Misdiagnosis of AMC may lead to prophylactic hemicolectomy or complete cecectomy. Further studies should elucidate commonly found endoscopic findings to raise awareness of AMC and avoid extensive surgery. 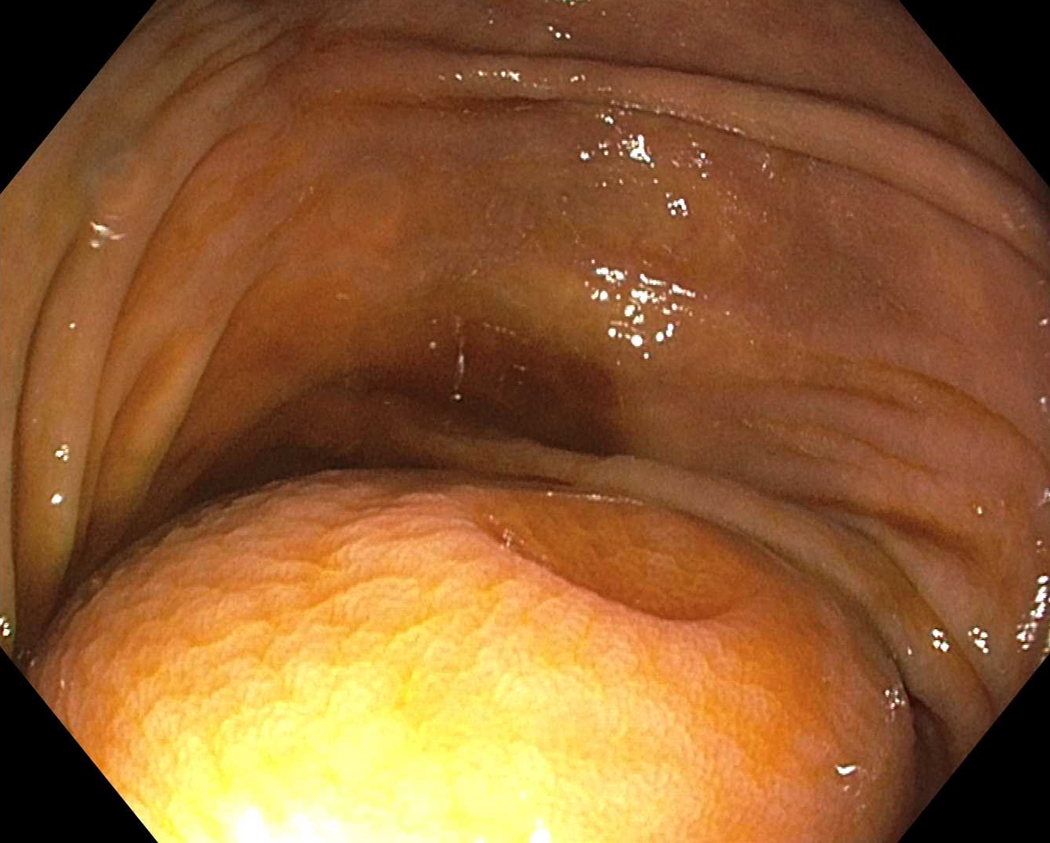 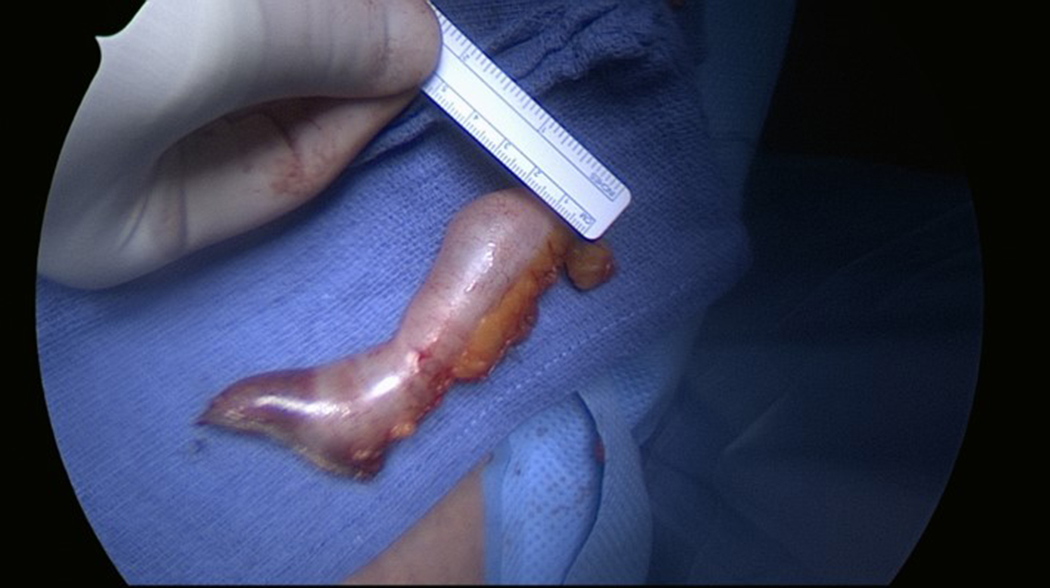 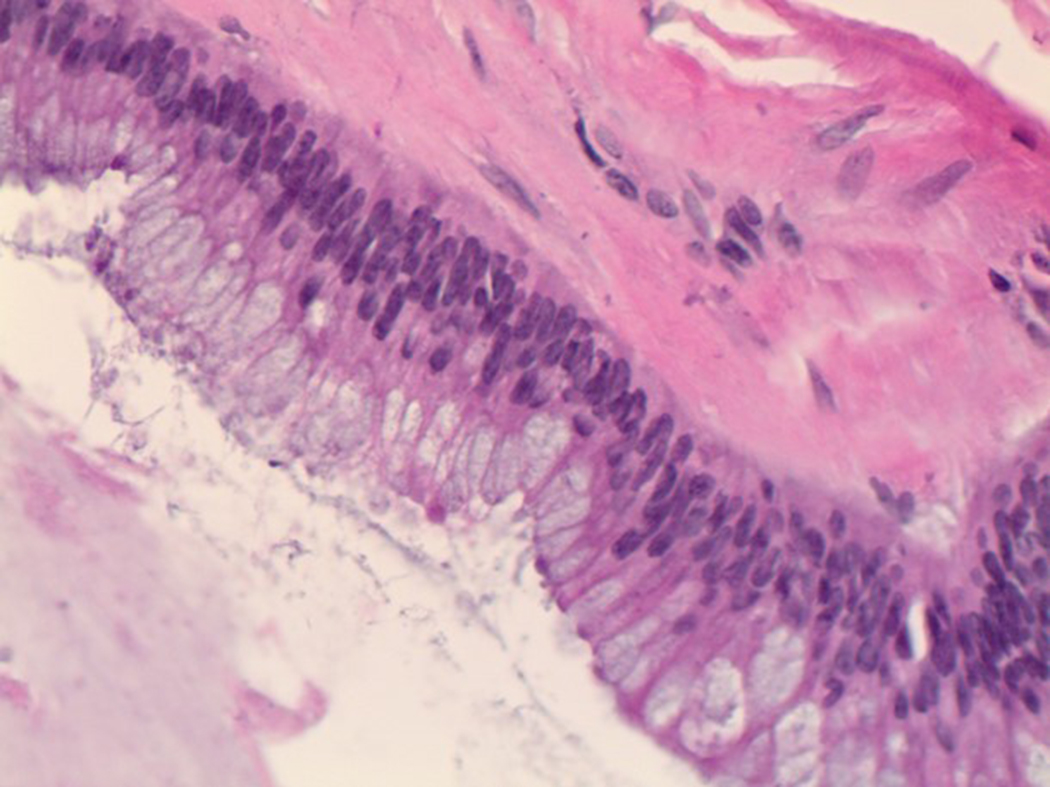 Medium and high power magnification of the lining of the appendix showing a simple columnar mucinous epithelium and scattered goblet cells.