Methods: This single centre prospective study of patients who underwent a colonoscopy between November 2019 and April 2020 included patients intolerant to a conventional bowel preparation. Eligible patients were offered either a pre-packaged LRD (elemental formula) or the standard CFD to be completed the day before the procedure, alongside a NEBP. The visual analogue scale for appetite, number of bowel motions, fluid intake and side effects experienced were patient reported. Baseline demographics including age and gender were recorded and blood samples collected. A Boston Bowel Preparation Score (BBPS) was calculated by the attending physician to evaluate the quality of the preparation. Mann Whitney U-tests were performed with statistical significance set at P< 0.05.

Results: A total of 18 patients met the inclusion criteria. Nine elected to complete their bowel preparation by means of a CFD and the remaining nine with a LRD. No significant differences in demographics was observed between the two groups (Table 1). Though non-significant, the LRD was associated with lower levels of hunger and greater levels of satisfaction (Figure 1). Despite no difference in the total volume of liquid consumed and the total number of capsules taken, patients who received the LRD tended to pass more motions and achieved a higher median BBPS (Table 1). Four times as many patients receiving the CFD displayed serum electrolyte imbalances which was associated with a twofold increase in the rate of side effects; most commonly nausea and vomiting (Table 1 and 2).

Discussion: A LRD combined with a NEBP achieves a greater level of appetite regulation and may also increase the efficacy of the NEBP and further reduce the side effects associated with bowel preparation in susceptible patients. Larger studies are required in order to confirm the present findings. 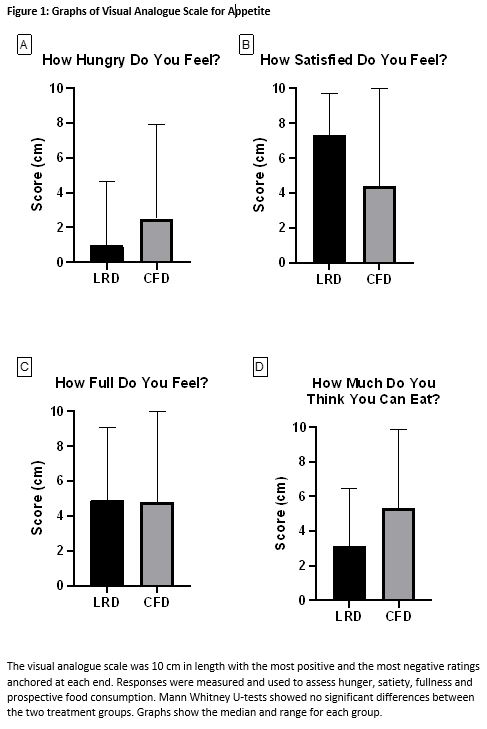