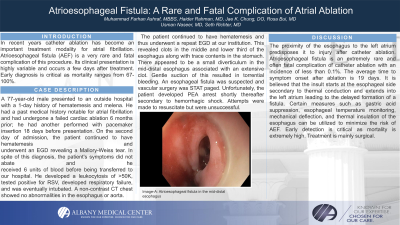 Introduction: In recent years catheter ablation has become an important treatment modality for atrial fibrillation.
Atrioesophageal fistula (AEF) is a very rare and fatal complication of this procedure. Its clinical presentation is
highly variable and occurs a few days after treatment. Early diagnosis is critical as mortality ranges from 67-100%.

Methods: A 77-year-old male presented to an outside hospital with a 1-day history of hematemesis and melena. He had a past medical history notable for atrial fibrillation and had undergone a failed cardiac ablation 6 months prior; he had another performed with pacemaker insertion 18 days before presentation. On the second day of admission, the patient continued to have hematemesis and
underwent an EGD revealing a Mallory-Weiss tear. In spite of this diagnosis, the patient's symptoms did not abate and he
received 6 units of blood before being transferred to our hospital. He developed a leukocytosis of >50K, tested positive for RSV, developed respiratory failure, and was eventually intubated. A non-contrast CT chest showed no abnormalities in the esophagus or aorta. The patient continued to have hematemesis and thus underwent a repeat EGD at our institution. This revealed clots in the middle and lower third of the esophagus along with trace contents in the stomach. There appeared to be a small diverticulum in the mid-distal esophagus associated with an extensive clot. Gentle suction of this resulted in torrential bleeding. An esophageal fistula was suspected and vascular surgery was STAT paged. Unfortunately, the patient developed PEA arrest shortly thereafter secondary to hemorrhagic shock. Attempts were made to resuscitate but were unsuccessful.

Discussion: The proximity of the esophagus to the left atrium predisposes it to injury after catheter ablation.
Atrioesophageal fistula is an extremely rare and often fatal complication of catheter ablation with an
incidence of less than 0.1%. The average time to symptom onset after ablation is 19 days. It is
believed that the insult starts at the esophageal side secondary to thermal conduction and extends into
the left atrium leading to the delayed formation of a fistula. Certain measures such as gastric acid
suppression, esophageal temperature monitoring, mechanical deflection, and thermal insulation of the
esophagus can be utilized to minimize the risk of AEF. Early detection is critical as mortality is extremely high. Treatment is mainly surgical. 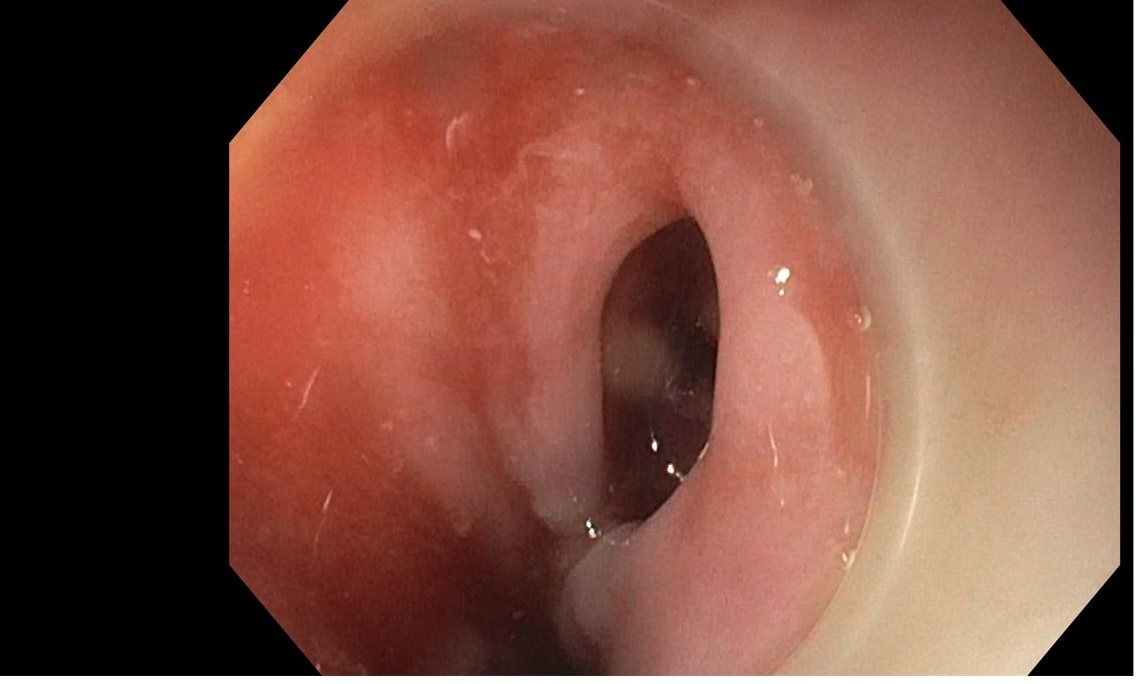