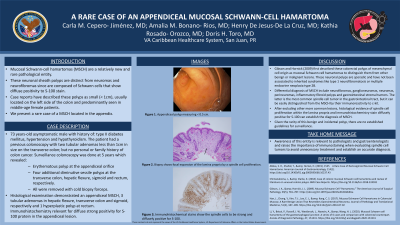 Introduction: Mucosal Schwann-cell hamartomas (MSCH) are a relatively new and rare pathological entity. These neuronal sheath polyps are distinct from neuromas and neurofibromas since are composed of Schwann cells that show diffuse positivity to S-100 stain. Case reports have described these polyps as small (< 1cm), usually located on the left side of the colon and predominantly seen in middle-age female patients. We present a rare case of a MSCH located in the appendix.

Methods: 73 y/o asymptomatic male with history of type II diabetes mellitus, hypertension, and hypothyroidism. The patient had a previous colonoscopy with two tubular adenomas less than 1cm in size on the transverse colon; but no personal or family history of colon cancer. He was referred for a surveillance colonoscopy.  Colonoscopy revealed an erythematous polyp at the appendiceal orifice and 4 additional diminutive sessile polyps at the transverse colon, hepatic flexure, sigmoid and rectum, respectively. All were removed with cold biopsy forceps. Pathology revealed an appendiceal MSCH, 3 tubular adenomas in hepatic flexure, transverse colon and sigmoid, respectively and 1 hyperplastic polyp at rectum. Immunohistochemistry relevant for diffuse strong positivity for S-100 protein in the appendiceal lesion.

Discussion: Gibson and Hornick (2009) first described these colorectal polyps of mesenchymal cell origin as mucosal Schwann cell hamartomas to distinguish them from other benign or malignant lesions. These neuronal polyps are sporadic and have not been associated to inherited syndromes like type 1 neurofibromatosis or multiple endocrine neoplasia type 2B. Differential diagnosis of MSCH include neurofibromas, ganglioneuromas, neuromas, perineuromas, inflammatory fibroid polyps and gastrointestinal stromal tumors.  The latter is the most common spindle cell tumor in the gastrointestinal tract, but it can be easily distinguished from the MSCH by their immunoreactivity to c-kit. After excluding other more common lesions, histological evidence of spindle cell proliferation within the lamina propria and immunohistochemistry stain diffusely positive for S-100 can establish the diagnosis of MSCH. Given the rarity of this benign and incidental polyp, there are no established guidelines for surveillance. Awareness of this entity is relevant to pathologists and gastroenterologists and raises the importance of immunostaining when evaluating spindle cell tumors to avoid unnecessary treatment and establish an accurate diagnosis. 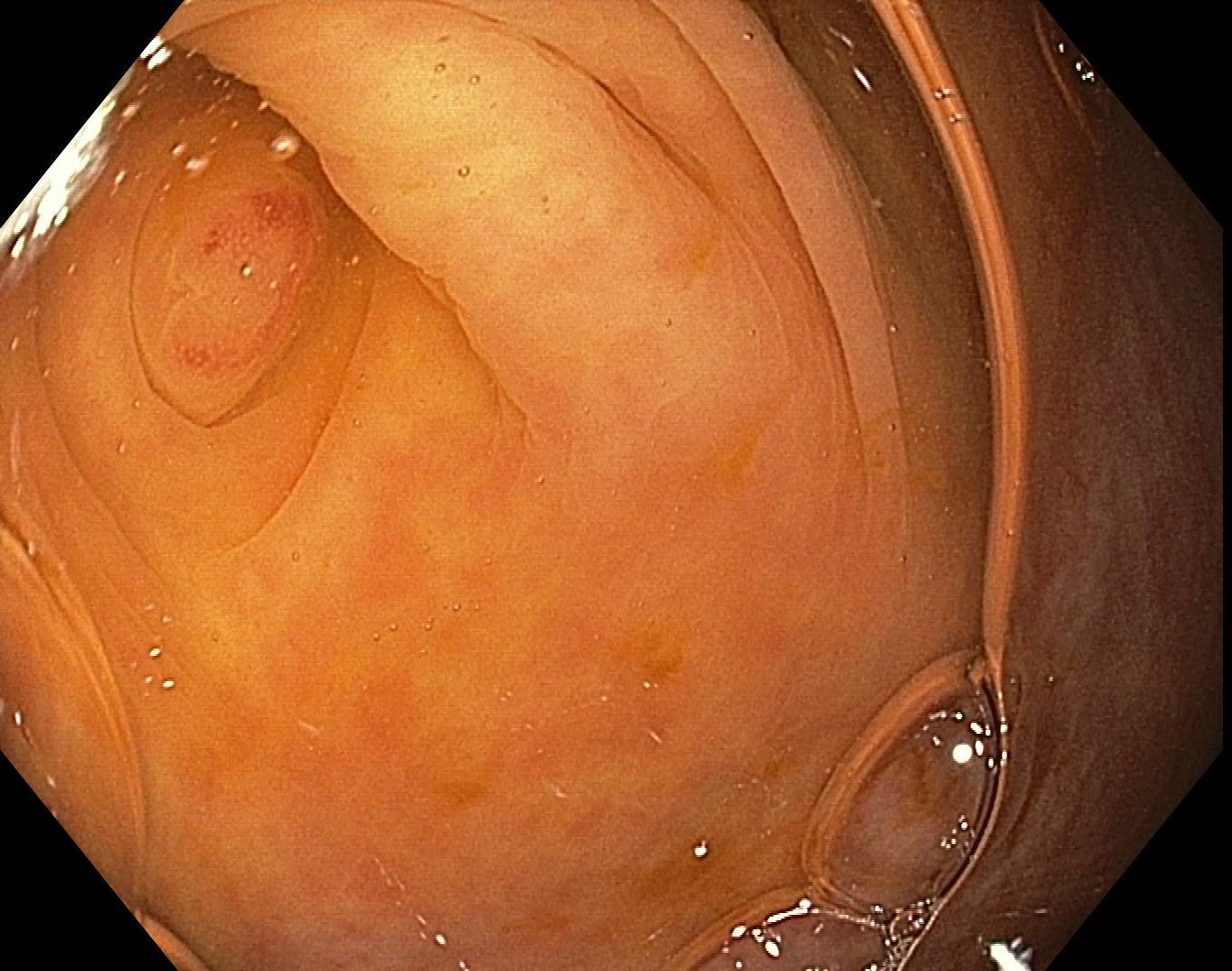 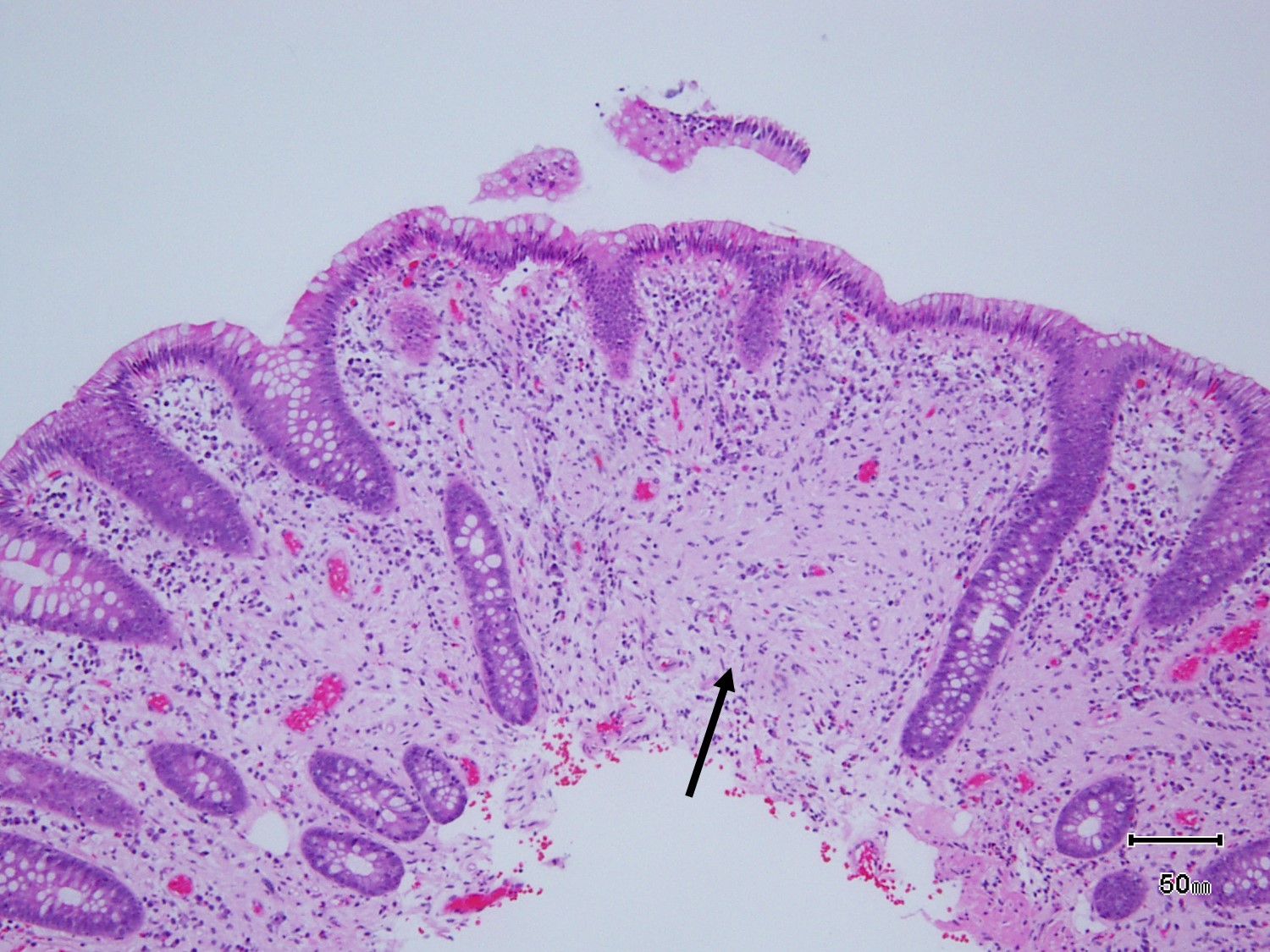 Sections of the biopsy show focal expansion of the lamina propria by a spindle cell proliferation. 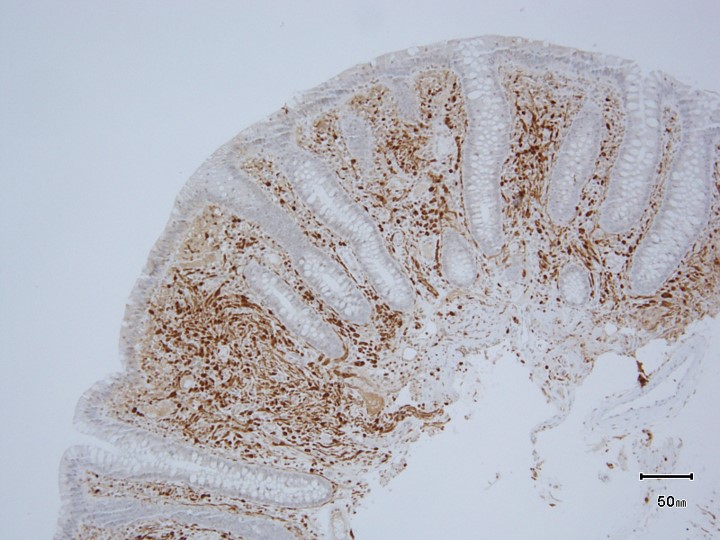 Immunohistochemical stains show the spindle cells to be strong and diffusely positive for S-100.