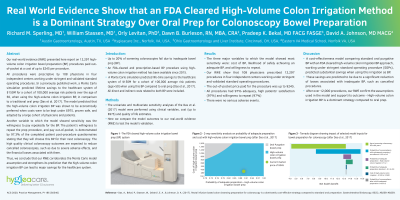 Introduction: Approximately 20% of screening colonoscopies fail due to inadequate colon preparation, leading to significant clinical and economic implications. An FDA-cleared and prescription-based bowel prep (BP) procedure using high-volume colonic water irrigation method has been available since 2015. Previously, a Monte Carlo simulation predicted life-time savings to the healthcare system of $150M for a of 100,000 average risk patients (age >50) when using this BP compared to oral prep. In the model, the water-irrigation BP was shown to be dominantly cost-effective if the prep was shown to be safe, adopted by both physicians and patients, and price per procedure is under $975

Methods: The univariate and multivariate sensitivity analyses of the model were performed using clinical variables, cost, and quality of life estimates. The cost variables were the cost of a traditional BP and the cost of a high-volume colon irrigation BP at $250. All direct and indirect costs related to both BP were included. The model’s primary outcomes were incremental cost-effectiveness ratio and a net health benefit when using the colon irrigation BP. Here we compare the model outcomes to our real-world evidence (RWE) to test its validity.

Results: The three major variables to which the model showed most sensitivities were: cost of BP, the likelihood of safely achieving adequate preparation, and willingness to repeat. Our RWE show that 108 physicians prescribed 12,297 procedures in four independent centers working under stringent and validated standard operating procedures. These procedures had 97% adequacy, high patients satisfaction (97%), and willingness to repeat (97%), and no serious adverse events. The out-of-pocket price paid for the procedure was up to $245.


Discussion: A cost-effectiveness model comparing standard oral purgative BP with an FDA cleared high-volume colonic water irrigation methods predicted that substantial savings in both direct and indirect costs can be achieved when using this water irrigation as BP (Das et al., 2017). These savings are predicted to be due to a significant reduction of losses associated with inadequate bowel prep. Monte Carlo simulation predicted lifetime savings to the healthcare system of $150M for a cohort of 100,000 average risk patients over the age of 50. After over 12,000 procedures, our RWE confirm the assumptions used in the model and support its outcome - colon-irrigation BP is a dominant strategy compared to oral prep.