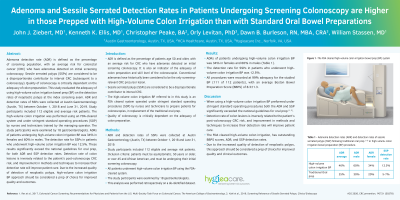 Introduction: Adenoma detection rate (ADR) is defined as the percentage of patients age 50 and older, with an average risk for colorectal cancer (CRC) who have adenomas detected on initial screening colonoscopy. ADR is an indicator of the adequacy of colonic preparation and skill level of the colonoscopist. Conventional adenomas have historically been considered to be the only screening-relevant CRC precursor lesion. However, sessile serrated polyps (SSPs) are considered to be a disproportionate contributor to interval CRC (subsequent to a colonoscopy). Quality of colonoscopy is critically dependent on the adequacy of colonic preparation. This study evaluated the adequacy of using high volume colonic water irrigation bowel prep (BP) on the detection rates of neoplastic polyps at the index screening exam.

Methods: ADR and detection rates of SSPs were collected at Austin Gastroenterology (Austin, TX) between October 1, 2018 and June 31, 2019. Study participants included 112 eligible and average risk patients. The high-volume colon irrigation was performed using an FDA-cleared system and under stringent standard operating procedures (SOP) by nurses and technicians trained by the managing operator. The study participants were examined by 18 gastroenterologists.

Discussion: When using a high-volume colonic water irrigation BP performed under stringent standard operating procedures the ADRs of patients was 34% in females and 60% for male, significantly exceeding the national guidelines for oral prep, 20% and 30%, respectively. The SSPs detection rate was also higher than the 5-7% previously recorded in literature. Detection rate of colonic lesions is inversely related to the patient’s post-colonoscopy CRC risk, and improvement in methods and techniques to increase their detection rate will improve patient care. The FDA cleared high-volume colonic water irrigation, has outstanding BBPS scores, ADR, and SSP detection rates.
Due to the increased quality of detection of neoplastic polyps, this approach should be considered a prep of choice for improved quality and outcomes.