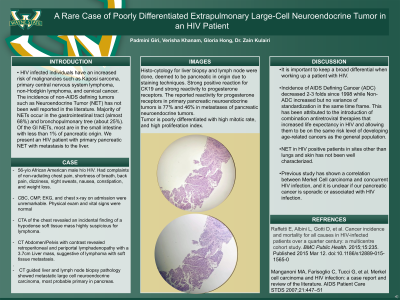 Introduction: HIV infected individuals have an increased risk of malignancies such as Kaposi sarcoma, primary central nervous system lymphoma, non-Hodgkin lymphom, and cervical cancer. The incidence of non-AIDSdefining tumors such as Neuroendocrine Tumor (NET) has not been well reported in the literature. Majority of NETs occur in the gastrointestinal tract (almost 68%) and bronchopulmonary tree (about 25%). Of the GI NETs, most are in the small intestine with less than 1% of pancreatic origin. We present an HIV patient with primary pancreatic NET with metastasis to the liver.

Methods: A 56-year-old African American male with history of HIV currently on antiretrovirals presented with complaints of non-radiating chest pain, shortness of breath, back pain, dizziness, night sweats, nausea, constipation, and recent weight loss. Patient is a current non-smoker with 30 pack year history, no recent travel or sick contacts. Initial workup, including CBC, CMP, EKG, and chest x-ray on admission were unremarkable. Physical exam and vital signs were within normal limits; however, due to the presenting symptoms, CTA of the chest was obtained revealing an incidental finding of a hypodense soft tissue mass highly suspicious for lymphoma. Follow up CT Abdomen and Pelvis with contrast revealed retroperitoneal and periportal lymphadenopathy along with a 3.7 cm Liver mass, suggestive of lymphoma with soft tissue metastasis. In view of these findings the primary working diagnosis was HIV associated lymphoma. However, CT guided liver and lymph node biopsy pathology favored metastatic large cell neuroendocrine carcinoma, most probable primary in pancreas.

Discussion: Even though there are malignancies commonly associated with HIV and AIDS, it is important to keep a broad differential when working up a patient with HIV. The incidence of ADC decreased 2-3 folds since 1998 while NADC increased in incidence but no variance of standardized in the same time frame. This has been attributed to the introduction of combination antiretroviral therapies that increased HIV patients life expectancy and allowing them to be at the same risk of developing age-related cancers as the general population. NET in HIV positive patients in sites other than lungs and skin has not been well characterized. Previous study has shown a correlation between Merkel Cell carcinoma and concurrent HIV infection, and it is unclear if our pancreatic cancer is sporatic or associated with HIV infection.