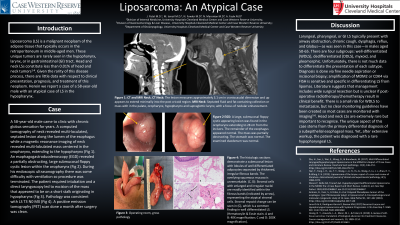 Introduction: Liposarcoma (LS) is a malignant neoplasm of the adipose tissue that typically occurs in the retroperitoneum in middle-aged men. These unique tumors are rarely seen in the hypopharynx, larynx, or in gastrointestinal (GI) tract. Head and neck LSs constitute less than 0.01% of head and neck tumors. Given the rarity of this disease process, there are little data with respect to clinical presentation, prognosis, and treatment of this neoplasm. Herein we report a case of a 58-year-old male with an atypical case of LS in the hypopharynx.

Methods: A 58-year-old male came to clinic with chronic globus sensation for years. A computed tomography of neck revealed multi-loculated, septated lesion along the lumen of the esophagus while a magnetic resonance imaging of neck revealed multi-lobulated mass centered in the oropharynx, extending to the hypopharynx (Fig 1). An esophagogastroduodenoscopy (EGD) revealed a partially obstructing, large submucosal floppy cystic lesion within the oropharynx (Fig 2). During his endoscopic ultrasonography there was some difficulty with ventilation so procedure was terminated. The patient required intubation and a direct laryngoscopy. Subsequently, the mass was resected. During the excision, it was noted that the mass appeared to be on a short stalk originating in hypopharynx (Fig 3). Pathology was consistent with LS T3 N0 MX. A positive emission tomography (PET) scan done one month after the surgical resection was negative for any pathology.

Discussion: Laryngeal, pharyngeal, or GI LS typically present with airway obstruction, chronic cough, dysphagia, reflux, and Globus—as was seen in this case—in males aged 50-65. There are four subgroups: well-differentiated (WDLS), dedifferentiated (DDLS), myxoid, and pleomorphic. Unfortunately, there is not much data to differentiate the presentation of each subtype. Diagnosis is done via fine needle aspiration or incisional biopsy; amplification of MDM2 or CDK4 via FISH is sensitive and specific in differentiating LS from lipomas. Literature suggests that management includes wide surgical resection but is unclear if post-operative radiotherapy/chemotherapy result in clinical benefit.

Head and neck LSs are extremely rare but important to recognize. Given the clinical presentation in this case, the primary differential diagnosis was a subepithelial esophageal mass. However, after extensive workup, the patient was found to have a rare hypopharyngeal LS. 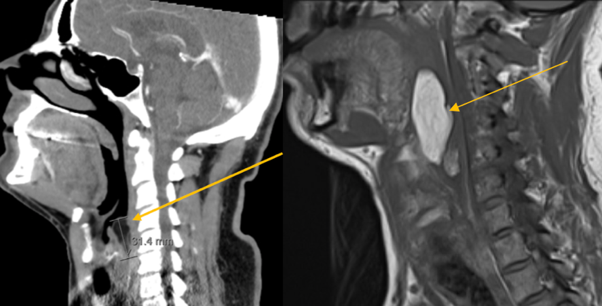 Figure 1: CT & MRI Neck. CT: The lesion measures approximately 3.1 cm in craniocaudal dimension and up appears to extend minimally into the post cricoid region. MRI: Septated fluid and fat containing collection or mass within the palate, oropharynx, hypopharynx and supraglottic larynx, with a focus of nodular enhancement.

Figure 2: EGD. A large, submucosal floppy cystic appearing lesion was found in the oropharynx extending to 28 cm from the incisors. The remainder of the esophagus appeared normal. The mass was partially obstructing. The stomach was normal. The examined duodenum was normal.

Figure 3: Operating room, gross pathology, and histology. (A, B): The histologic sections demonstrate a submucosal lesion with lobules of well differentiated adipocytes separated by thickened, irregular fibrous bands. The overlying squamous mucosa is unremarkable. (C, D): Stromal cells with enlarged and irregular nuclei are readily identified within the fibrous bands (indicated by arrow), representing the atypical stromal cells. Stromal myxoid change can be seen in (C), which is a common finding in well differentiated LS. (Hematoxylin & Eosin stain. A and B: 40X magnification; C and D: 200X magnification).