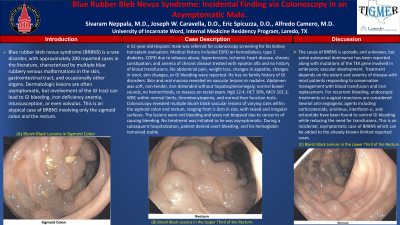 Introduction: Blue rubber bleb nevus syndrome (BRBNS) is a rare disorder, with approximately 200 reported cases in the literature, characterized by multiple blue rubbery venous malformations in the skin, gastrointestinal tract, and occasionally other organs. Dermatologic lesions are often asymptomatic, but involvement of GI tract can lead to GI bleeding, iron deficiency anemia, intussusception, or even volvulus. This is an atypical case of BRBNS involving only the sigmoid colon and the rectum.

Methods: A 51-year-old Hispanic male was referred for colonoscopy screening for his kidney transplant evaluation. Medical history included ESRD on hemodialysis, type 2 diabetes, COPD due to tobacco abuse, hypertension, ischemic heart disease, chronic constipation, and anemia of chronic disease treated with epoetin alfa and no history of blood transfusions. No abdominal pain, weight loss, changes in appetite, changes in stool, skin changes, or GI bleeding were reported. He has no family history of GI disorders. Skin and oral mucosa revealed no vascular lesions or nodules. Abdomen was soft, non-tender, non-distended without hepatosplenomegaly, normal bowel sounds, no hemorrhoids, or masses on rectal exam. Hgb 12.4, HCT 39%, MCV 101.3, WBC within normal limits, thrombocytopenia, and normal liver function tests.
Colonoscopy revealed multiple bluish black vascular lesions of varying sizes within the sigmoid colon and rectum, ranging from 1-3cm in size, with raised and irregular surfaces. The lesions were not bleeding and were not biopsied due to concerns of causing bleeding. No treatment was initiated as he was asymptomatic. During a subsequent hospitalization, patient denied overt bleeding, and his hemoglobin remained stable.

Discussion: The cause of BRBNS is sporadic and unknown, but some autosomal dominance has been reported along with mutations of the TEK gene involved in embryonic vascular development. Treatment depends on the extent and severity of disease with most patients responding to conservative management with blood transfusion and iron replacement. For recurrent bleeding, endoscopic treatments or surgical resections are considered. Several anti-angiogenic agents including corticosteroids, sirolimus, interferon-a, and octreotide have been found to control GI bleeding while reducing the need for transfusions. This is an incidental, asymptomatic case of BRBNS which can be added to the already known limited reported cases. 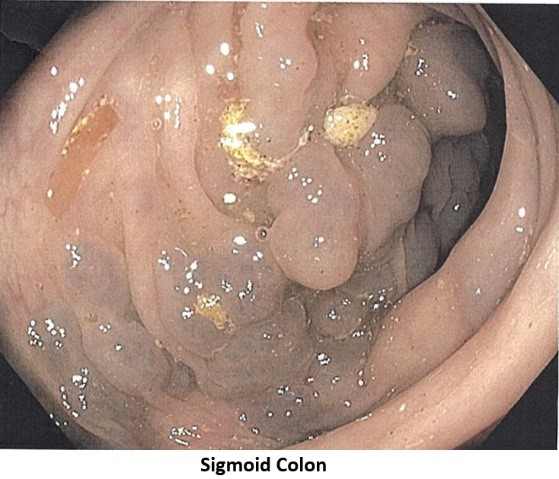 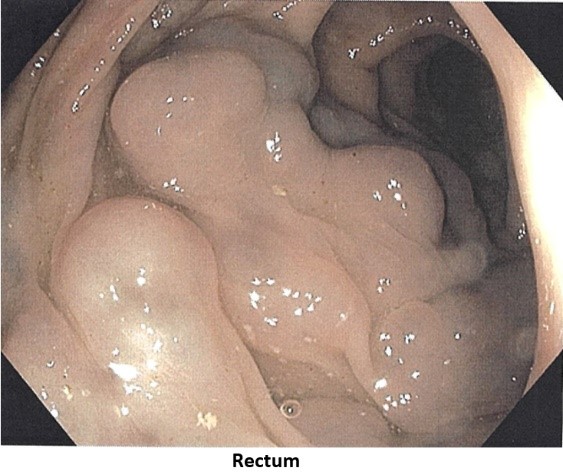