P0154 (S1398). - Biliary Stricture in a Patient With Metastatic Mixed Germ Cell Tumor (MGCT) of the Testis: A Case Report 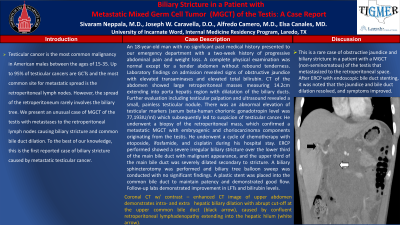 Methods: An 18-year-old man with no significant past medical history presented to our emergency department with a two-week history of progressive abdominal pain and weight loss. A complete physical examination was normal except for a tender abdomen without rebound tenderness. Laboratory findings on admission revealed signs of obstructive jaundice with elevated transaminases and elevated total bilirubin. CT of the abdomen showed large retroperitoneal masses measuring 14.2cm extending into porta hepatis region with dilatation of the biliary ducts. Further evaluation including testicular palpation and ultrasound revealed a small testicular nodule. There was an abnormal elevation of testicular markers (serum beta-human chorionic gonadotropin level was 77,193IU/ml) which subsequently led to suspicion of testicular cancer. He underwent a biopsy of the retroperitoneal mass, which confirmed a metastatic MGCT with embryogenic and choriocarcinoma components originating from the testis. He underwent a cycle of chemotherapy with etoposide, ifosfamide, and cisplatin during his hospital stay.
ERCP performed showed a severe irregular biliary stricture over the lower third of the main bile duct with malignant appearance, and the upper third of the main bile duct was severely dilated secondary to stricture. A biliary sphincterotomy was performed and biliary tree balloon sweep was conducted with no significant findings. A plastic stent was placed into the common bile duct to maintain patency and demonstrated good flow. Follow-up labs demonstrated improvement in LFTs and bilirubin levels.

Discussion: This is a rare case of obstructive jaundice and biliary stricture in a patient with a MGCT (non-seminomatous) of the testis that metastasized to the retroperitoneal space. After ERCP with endoscopic bile duct stenting, it was noted that the jaundice and bile duct dilation resolved and symptoms improved.