P0994 (S1943). - LINX Procedure for Management of Chronic Gastro-Esophageal Reflux Disease in a Patient With Jackhammer Esophagus: A Case Report 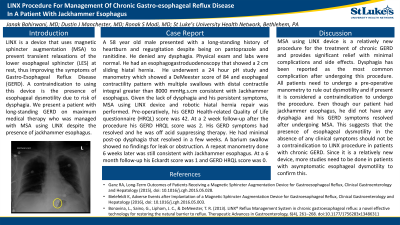 Introduction: LINX is a device that uses magnetic sphincter augmentation (MSA) to prevent transient relaxations of the lower esophageal sphincter (LES) at rest, thus improving the symptoms of Gastro-Esophageal Reflux Disease (GERD). A contraindication to using this device is the presence of esophageal dysmotility due to risk of dysphagia. We present a patient with long-standing GERD on maximum medical therapy who was managed with MSA using LINX despite the presence of jackhammer esophagus.

Methods: A 58 year old male presented with a long-standing history of heartburn and regurgitation despite being on pantoprazole and ranitidine. He denied any dysphagia. Physical exam and labs were normal. He had an esophagogastroduodenoscopy that showed a 2 cm sliding hiatal hernia.  He underwent a 24 hour pH study and manometry which showed a DeMeester score of 84 and esophageal contractility pattern with multiple swallows with distal contractile integral greater than 8000 mmHg.s.cm consistent with Jackhammer esophagus. Given the lack of dysphagia and his persistent symptoms, MSA using LINX device and robotic hiatal hernia repair was performed. Pre-operatively, his GERD Health-related Quality of Life questionnaire (HRQL) score was 25. At a 2 week follow-up after the procedure his GERD HRQL score was 2. His GERD symptoms had resolved and he was off acid suppressing therapy. He had minimal post-op dysphagia that resolved in a few weeks. A barium swallow showed no findings for leak or obstruction. A repeat manometry done 6 weeks later was still consistent with Jackhammer esophagus. At a 6 month follow-up his Eckardt score was 1 and GERD HRQL score was 0.

Discussion: MSA using LINX device is a relatively new procedure for the treatment of chronic GERD and provides significant relief with minimal complications and side effects. Dysphagia has been reported as the most common complication after undergoing this procedure. All patients need to undergo a pre-operative manometry to rule out dysmotility and if present it is considered a contraindication to undergo the procedure. Even though our patient had jackhammer esophagus, he did not have any dysphagia and his GERD symptoms resolved after undergoing MSA. This suggests that the presence of esophageal dysmotility in the absence of any clinical symptoms should not be a contraindication to LINX procedure in patients with chronic GERD. Since it is a relatively new device, more studies need to be done in patients with asymptomatic esophageal dysmotility to confirm this.