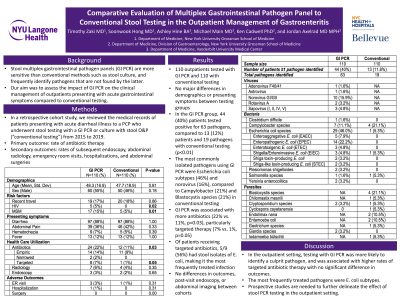 Introduction: Stool multiplex gastrointestinal pathogen panels (GI PCR) are more sensitive than conventional methods such as stool culture, and frequently identify pathogens that are not found by the latter. Our aim was to assess the impact of GI PCR on the clinical management of outpatients presenting with acute gastrointestinal symptoms compared to conventional testing.

Methods: In a retrospective cohort study, we reviewed the medical records of patients presenting with acute diarrheal illness to a primary care physician who underwent stool testing with a GI PCR or culture with ova and parasite exam (“conventional testing”) at an academic medical center from September 2015 to April 2019. We recorded pathogens isolated, demographic data, behavioral risk factors for enteric infection, and presenting symptoms. The primary outcome was rate of antibiotic therapy. Secondary outcomes were rates of subsequent endoscopy, abdominal radiology, emergency room visits, hospitalizations, and abdominal surgeries.

Results: We identified 110 outpatients tested with GI PCR and 110 with conventional testing. There were no major differences in demographics or presenting symptoms between testing groups. Patients in the GI PCR group were more likely to be men who have sex with men (MSM; 15% vs. 5%, p=0.01) or have HIV (5% vs. 0%, p=0.02; Table 1). In the GI PCR group, 44 (40%) patients tested positive for 63 pathogens compared to 13 (12%) patients and 19 pathogens with conventional testing (p< 0.01). The most commonly isolated pathogens using GI PCR were Escherichia coli subtypes (46%) and norovirus (16%) whereas Campylobacter (21%) and Blastocystis species (21%) were the most common in conventional testing (Table 2). GI PCR was associated with more antibiotics (22% vs. 11%, p=0.03), particularly targeted therapy (7% vs. 1%, p=0.05). Of patients who received targeted antibiotics, 5/9 (56%) had stool isolates of E. coli, making it the most frequently treated infection. There were no differences in outcomes, post-visit endoscopy, or abdominal imaging between cohorts.

Discussion: In the outpatient setting, testing with GI PCR was more likely to identify a culprit pathogen, and was associated with higher rates of targeted antibiotic therapy with no significant difference in outcomes. The most frequently treated pathogens were E. coli subtypes. Prospective studies are needed to further delineate the effect of stool PCR testing in the outpatient setting. 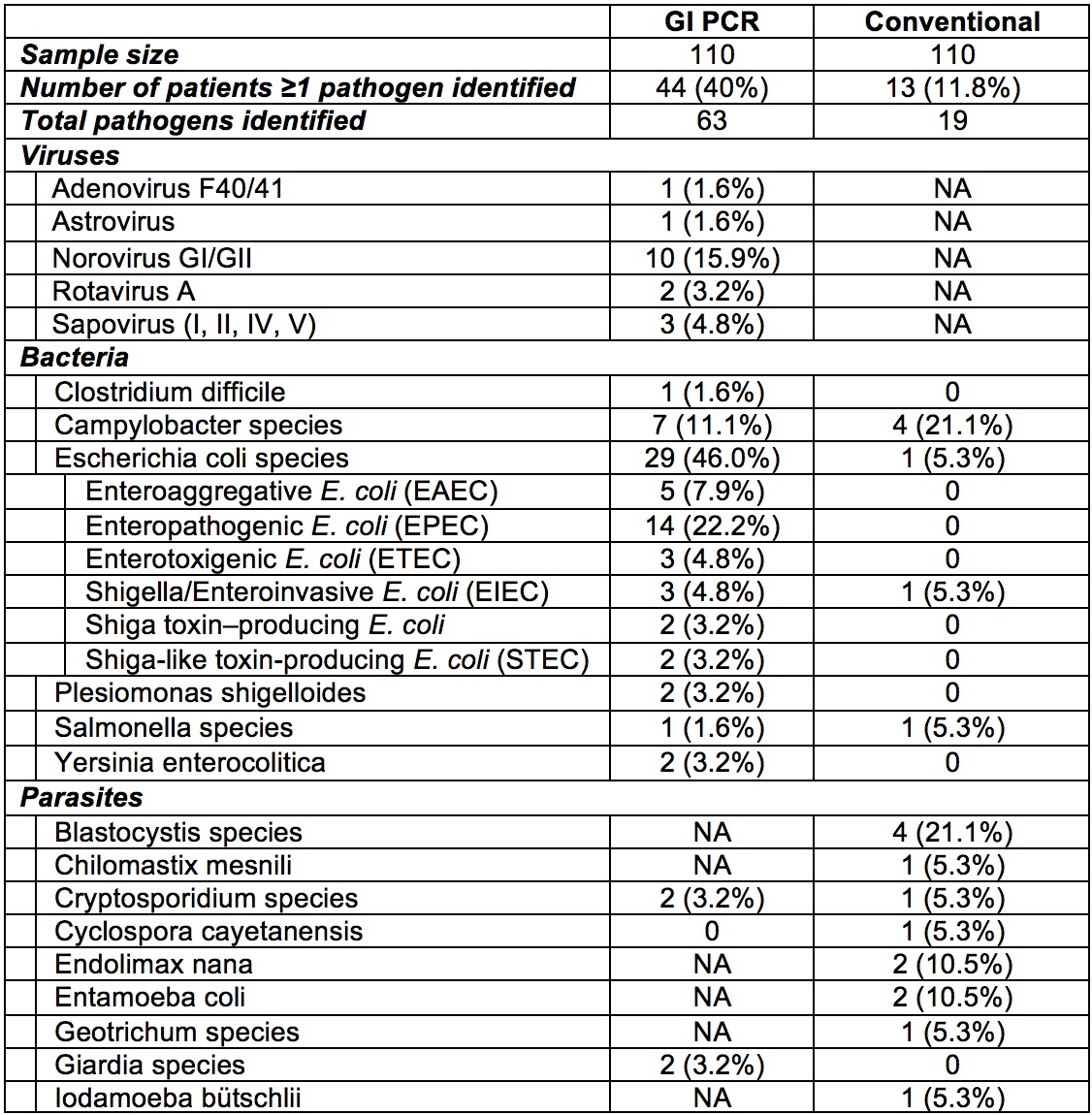