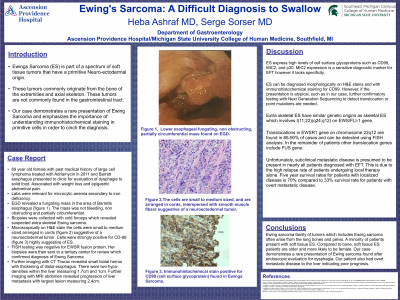 Ewing sarcoma family of tumors (EFT) compromises of a spectrum of similar histological undifferentiated cells. EFT includes Ewings Sarcoma (ES) and Primitive Neuroectodermal Tumor (PNET). These tumors are rare and aggressive with a tendency of early metastatic spread. Peak incidence are between ages of 10-15 years of age; however, 30% can occur in adults over the age of 20. EFT affect mainly Caucasians and are extremely uncommon in other races. Most common origin occurs from the bone of the extremities and axial skeleton. These tumors are not commonly found in the gastrointestinal tract. Our case demonstrates a rare presentation of metastatic Ewing Sarcoma found during evaluation for dysphagia.

69 year old female who is a daily smoker with history of large cell lymphoma (previously treated with Adriamycin) and Barrett's esophagus presented with dysphagia. Labs were relevant for iron deficiency anemia. EGD revealed a fungating mass in an area of Barretts esophagus. The mass was not bleeding, non obstructing and partially circumferential. Biopsies from the mass revealed Ewing sarcoma (ES) based on histological stains. Microscopically the cells were arranged in cords suggestive of a neuroectodermal tumor. Fluorescent in situ hybridization (FISH) testing was negative for EWSR fusion protein. Cells were strongly positive for CD-99 and weakly positive for FLI1 also highly suggestive of ES. Further imaging revealed metastatic disease to the liver. Liver lesions were also biopsied confirming diagnosis of extra-skeletal Ewings Sarcoma.

Soft tissue Ewing Sarcoma patients are older and more likely to be female. These tumors do express high levels of cell surface glycoproteins such as CD99, MIC2, and p30. MIC2 expression is a sensitive diagnostic marker for ES however it lacks specificity. Typically ES can be diagnosed with immunohistochemical stains for CD99 in the right clinical setting. However, if the presentation is atypical, such as in our case, further confirmatory testing with Next Generation Sequencing to detect translocation or point mutations are needed. Because of the vast differentials molecular genetics plays a large role in diagnosis. Translocations in EWSR1 gene on chromosome 22q12 are found in 85% of cases and can be detected using FISH analysis. This case illustrates the importance of timely establishment of type of esophageal cancer in order to obtain prompt molecular genetic assessments in order to confirm histological diagnosis. 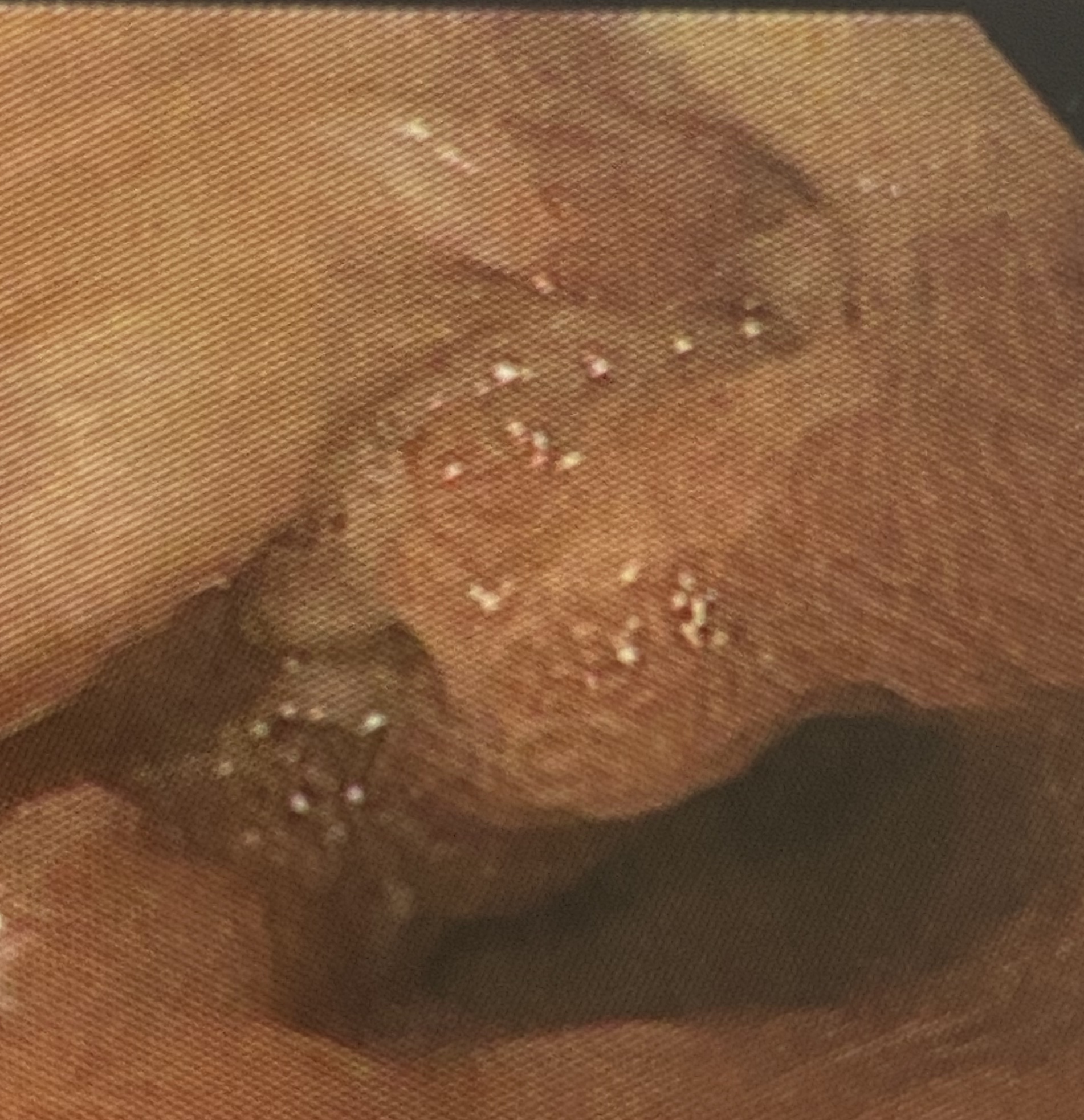 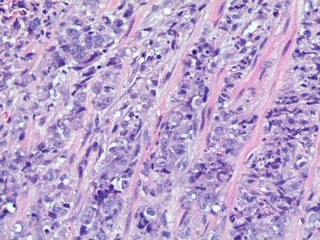 The cells are small to medium sized, and are arranged in cords, interspersed with smooth muscle fibers suggestive of a neuroectodermal tumor. 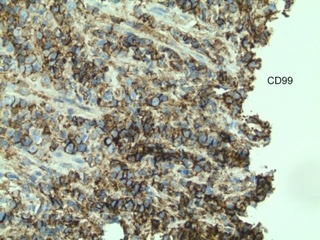