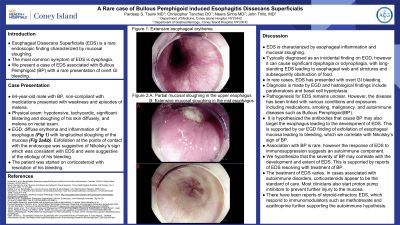 Introduction: Esophageal Dissecans Superficialis (EDS) is a rare endoscopic finding characterized by mucosal sloughing. It’s etiology and pathogenesis are unclear but it has been associated with autoimmune disorders. The most common symptom of EDS is dysphagia. We present a case of EDS associated with bullous pemphigoid that presented with overt GI bleeding.

Methods: A 64-year-old male with a history of bullous pemphigoid presented with melena. On physical exam he was hypotensive and tachycardic. He had blistering and sloughing of his skin diffusely and melena was noted on rectal exam. Labs: hemoglobin of  7.6g/dL, ESR of 140mm/hr. After resuscitation, the patient underwent endoscopy that revealed diffuse erythema and inflammation of the esophagus (Figure 1) with longitudinal sloughing of the mucosa (Figure 2) and exfoliation and oozing at the points of contact with the endoscope suggestive of Nikolsky’s phenomenon with bleeding. These findings were consistent with EDS. The remaining endoscopic exam was normal. The patient was started on corticosteroid therapy with resolution of his GI bleeding. He was discharged on steroids with plans for maintenance therapy for bullous pemphigoid. On follow up, he refused repeat EGD.

Discussion: Frequently, EDS is an incidental finding however it can cause dysphagia. In rare cases, EDS presents with overt GI bleeding. EDS has been associated with pemphigoid disease. Bullous pemphigoid occurs when antibodies target the basement membrane of squamous epithelium with subsequent blistering. These antibodies can also target the squamous epithelium of the esophagus. This is supported by our endoscopic finding of exfoliation of esophageal mucosa at points of contact with the endoscope. We correlate this with Nikolsky’s phenomenon in patients with bullous pemphigoid. Although this association with pemphigoid is rare, the response of EDS to immunosuppressive therapy suggests an underlying autoimmune component. We hypothesize that the severity of pemphigoid may correlate with the development and extent of EDS. In cases associated with autoimmune disorders, corticosteroids are the standard of care. There are cases reported of steroid-refractory EDS, which did respond to immunomodulators such as methotrexate and azathioprine. EDS is a rare endoscopic finding, that in our case, was associated with bullous pemphigoid. Additionally, EDS rarely presents with overt gastrointestinal bleeding. This case serves to increase awareness of diagnosis and associations of EDS. 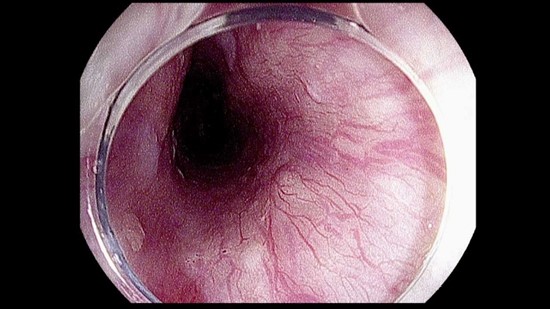 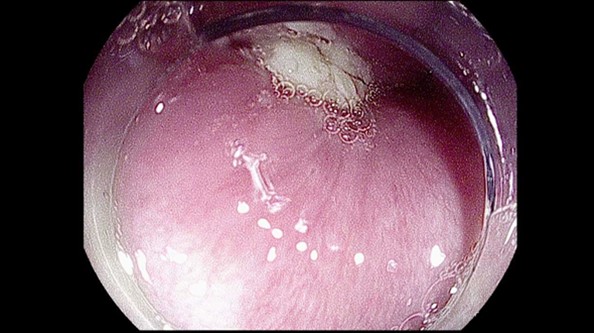 Figure 2a: Partial mucosal sloughing in the upper esophagus 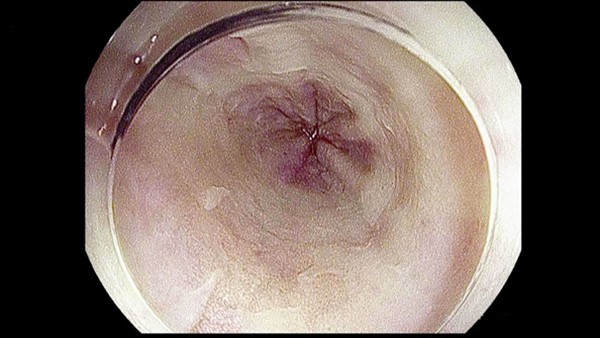