P0179 (S1423). - Lipoprotein Lipase Deficiency as a Rare Cause of Acute Pancreatitis 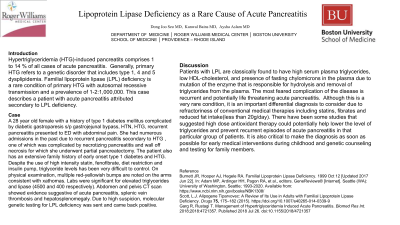 Introduction: Hypertriglyceridemia (HTG)-induced pancreatitis comprises 1 to 14 % of all cases of acute pancreatitis.  Generally, primary HTG refers to a genetic disorder that includes type 1, 4 and 5 dyslipidemia. Familial lipoprotein lipase (LPL) deficiency is a rare condition of primary HTG with autosomal recessive transmission and a prevalence of 1-2:1,000,000. This case describes a patient with acute pancreatitis attributed secondary to LPL deficiency.

Methods: A 28 year old female with a history of type 1 diabetes mellitus complicated by diabetic gastroparesis s/p gastrojejunal bypass, HTN, HTG, recurrent pancreatitis presented to ED with abdominal pain. She had numerous admissions in the past due to recurrent pancreatitis secondary to HTG , one of which was complicated by necrotizing pancreatitis and wall off necrosis for which she underwent partial pancreatectomy. The patient also has an extensive family history of early onset type 1 diabetes and HTG. Despite the use of high intensity statin, fenofibrate, diet restriction and insulin pump, triglyceride levels has been very difficult to control. On physical examination, multiple red-yellowish bumps are noted on the arms consistent with xathomas. Labs were significant for elevated triglycerides and lipase (4500 and 400 respectively). Abdomen and pelvis CT scan showed evidence suggestive of acute pancreatitis, splenic vein thrombosis and hepatosplenomegaly. Due to high suspicion, molecular genetic testing for LPL deficiency was sent and came back positive.

Discussion: Patients with LPL are classically found to have high serum plasma triglycerides, low HDL-cholesterol, and presence of fasting chylomicrons in the plasma due to mutation of the enzyme that is responsible for hydrolysis and removal of triglycerides from the plasma. The most feared complication of the disease is recurrent and potentially life threatening acute pancreatitis.  Although this is a very rare condition, it is an important differential diagnosis to consider due to refractoriness of conventional medical therapies including statins, fibrates and reduced fat intake(less than 20g/day). There have been some studies that suggested high dose antioxidant therapy could potentially help lower the level of triglycerides and prevent recurrent episodes of acute pancreatitis in that particular group of patients. It is also critical to make the diagnosis as soon as possible for early medical interventions during childhood and genetic counseling and testing for family members.