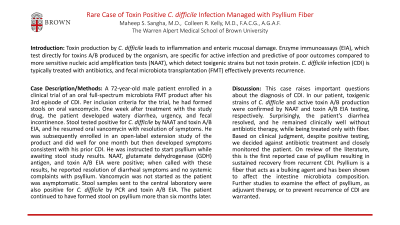 A 72-year-old male patient enrolled in a clinical trial of an oral full-spectrum microbiota FMT product after his 3rd episode of CDI. Per inclusion criteria for the trial, he had formed stools on oral vancomycin. One week after treatment with the study drug, the patient developed watery diarrhea, urgency, and fecal incontinence. Stool tested positive for C. difficile by NAAT and toxin A/B EIA, and he resumed oral vancomycin with resolution of symptoms. He was subsequently enrolled in an open-label extension study of the product and did well for one month but then developed symptoms consistent with his prior CDI. He was instructed to start psyllium while awaiting stool study results. NAAT, glutamate dehydrogenase (GDH) antigen, and toxin A/B EIA were positive; when called with these results, he reported resolution of diarrheal symptoms and no systemic complaints with psyllium. Vancomycin was not started as the patient was asymptomatic. Stool samples sent to the central laboratory were also positive for C. difficile by PCR and toxin A/B EIA. The patient continued to have formed stool on psyllium more than six months later.

Discussion: This case raises important questions about the diagnosis of CDI. In our patient, toxigenic strains of C. difficile and active toxin A/B production were confirmed by NAAT and toxin A/B EIA testing, respectively. Surprisingly, the patient’s diarrhea resolved, and he remained clinically well without antibiotic therapy, while being treated only with fiber. Based on clinical judgment, despite positive testing, we decided against antibiotic treatment and closely monitored the patient. On review of the literature, this is the first reported case of psyllium resulting in sustained recovery from recurrent CDI.  Psyllium is a fiber that acts as a bulking agent and has been shown to affect the intestine microbiota composition. Further studies to examine the effect of psyllium, as adjuvant therapy, or to prevent recurrence of CDI are warranted.