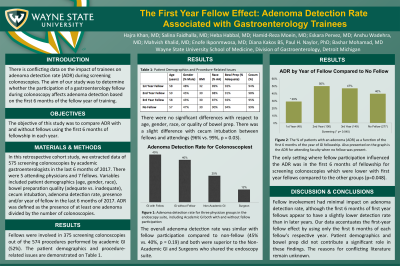 Introduction: There is conflicting data on the impact of trainees on adenoma detection during screening and surveillance colonoscopies. The aim of our study was to determine whether the participation of a gastroenterology fellow during colonoscopy affects adenoma detection based on the first 6 months of the fellow year of training.

Methods: In this retrospective cohort study, we extracted data of 575 screening colonoscopies by academic gastroenterologists in the last 6 months of 2017. There were 5 attending physicians and 7 fellows. Variables included patient demographics (age, gender, race), colonoscopy indication (surveillance vs. screening), bowel preparation quality (adequate vs. inadequate), cecum intubation, adenoma detection, presence and/or year of fellow in the last 6 months of 2017.   Adenoma detection rate was defined as the presence of at least one adenoma /number of colonoscopies.

Results: At our institution, academic physicians have a better ADR for screening (46%) as compared to non-Academic GI physicians (46%) and surgeons.  Fellows were involved in 297 screening colonoscopies out of the 574 procedures performed by academic GI (57%) . The mean patient age was 58.4 years, and most patients were African American (88 %) and female (54%). There were no significant differences with respect to age, gender, race, indication for colonoscopy, or quality of bowel prep. There was a slight difference with cecum intubation between fellows and attendings (96% vs. 99%, p = 0.03). The overall adenoma detection was similar with fellow participation compared to non-fellow (45% vs. 40%, p = 0.19).  Results by year of fellowship and screening colonoscopies are shown in figure 1. The only setting where fellow participation influenced the detection of adenoma was in the first 6 months of fellowship for screening colonoscopies which were lower with fellows compared to the other groups (p=0.048).

Discussion: Fellow involvement had minimal impact on adenoma detection, although first year fellows appear to have a slightly lower detection rate than in later years. Our data accentuates the first-year fellow effect by using only the first 6 months of each fellow’s respective year. Patient demographics, colonoscopy indication and bowel prep did not contribute a significant role in these findings. The reasons for conflicting literature remain unknown.

Figure 1: The % of patients with an adenoma (ADR) as a function of the year of GI fellowship. Also presented on the graph is the ADR for attending faculty when no fellow was present.