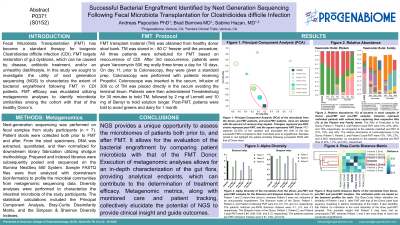 Introduction: Fecal Microbiota Transplantation (FMT) has become a standard therapy for toxigenic Clostridioides difficile infection (CDI). In this study we sought to investigate the utility of next generation sequencing (NGS) to characterize the extent of bacterial engraftment following FMT in CDI patients. FMT efficacy was elucidated utilizing metagenomic analyses to identify microbiota similarities among the cohort with that of the healthy Donor’s.

Results: Principal Component Analysis (Fig. 1) of the microbiota from study participants was executed to investigate the variance among them. PC1 and PC2 captured 52% and 34% of the variation respectively, and clearly highlighted the shift in the patients’ gut flora compared to their microbiota prior to engraftment.
The relative abundances (Fig. 2) of the bacterial taxa in the samples elucidated the compositional resemblance of Patients 1 and 2 after their FMT with that of their Donor. The pre-FMT relative abundance of Firmicutes in Patient 1 and Patient 2 were 51% and 15%, whereas after FMT they matched closely with the Donor (73%) at 63% and 60%. The 16% in Patient 3 was suggestive of a failed engraftment, as it was not close to that of the Donor. Similarly, Lachnospiraceae in the Donor (15%) matched with the post-FMT of Patient 1 (19%) and Patient 2 (27%), whereas it did not with Patient 3 (0.36%).
The Bray-Curtis Distance Matrix (Fig. 3) was utilized to profile the overall microbiota from the study participants. The ordination matrix identified the similarity of Patient 1 and 2 post-FMT with that of the Donor (dark blue squares), clustering in distinct coordinates. It also captured that Patient 3 was the most dissimilar among the post-FMT cohort.

Discussion: NGS provides a unique opportunity to assess the microbiomes of patients both prior to, and after FMT; and for the evaluation of the bacterial engraftment. Metagenomic characterization of the gut flora, along with monitored care and patient tracking, collectively elucidate the potential of NGS to provide clinical insight and guide outcomes. 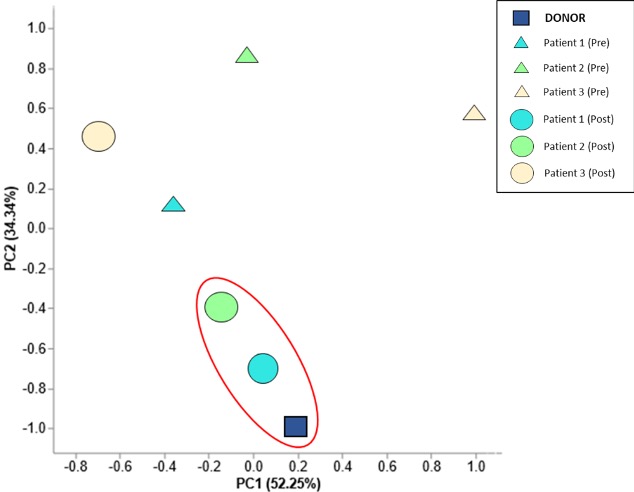 Principal Component Analysis (PCA) of the microbiota from the Donor, pre-FMT patients, and post-FMT patients. The samples circled in red highlight the similarity of Patient 1 and 2 following their FMTs with that of their Donor. 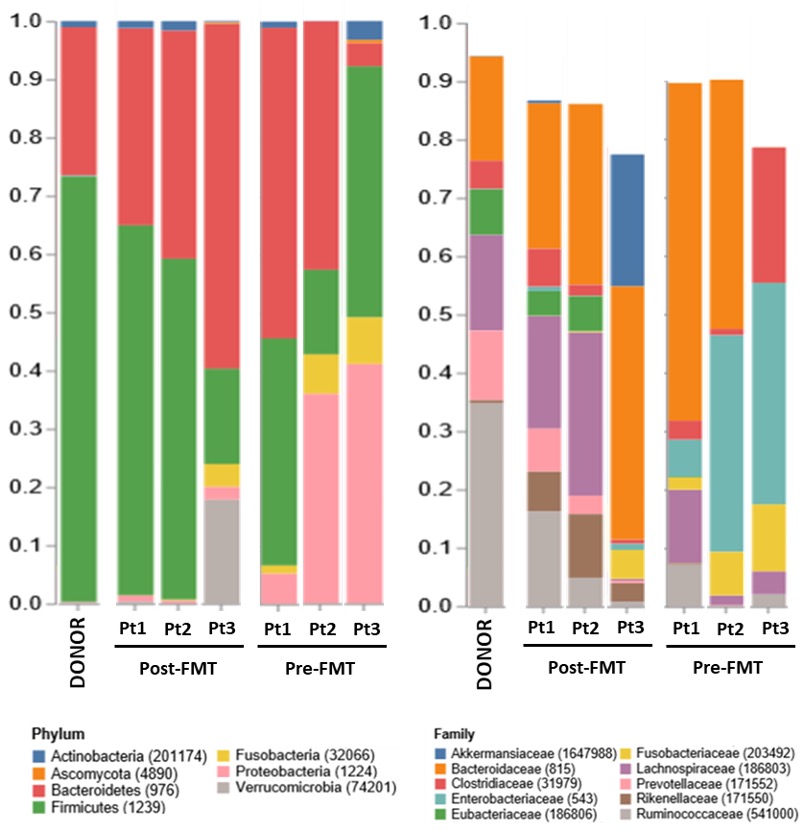 Relative abundances (%) of bacteria in stool samples of Donor, post-FMT and pre-FMT samples at the Phylum and Family level.

Bray-Curtis Distance Matrix of the microbiota from Donor, pre-FMT and post-FMT patients. The samples boxed in red highlight the similarity of Patient 1 and 2 following their FMTs with that of their Donor.