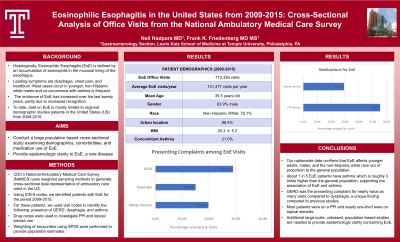 Introduction: Histologically, Eosinophilic Esophagitis (EoE) is defined by an accumulation of eosinophils in the mucosal lining of the esophagus. Leading symptoms are dysphagia, chest pain, and heartburn. Most cases occur in younger, non-Hispanic white males and co-occurrence with asthma is frequent. The incidence of EoE has increased over the last twenty years, partly due to increased recognition. To date, data on EoE is mostly limited to regional demographic studies. Our aim was to conduct a cross-sectional study examining demographics, comorbidities, and medication use of EoE patients in the United States (US) from 2009-2015.

Methods: The CDC’s National Ambulatory Medical Care Survey (NAMCS) uses weighted sampling methods to generate cross-sectional data representative of ambulatory care visits in the US. Using ICD-9 codes, we identified patients with EoE for the period 2009-2015. For these patients, we used visit codes to identify the following: presence of GERD, dysphagia, and asthma. Drug codes were used to investigate PPI and topical steroid use. Weighting of encounters using SPSS were performed to provide population estimates.

Discussion: Our nationwide data confirms that EoE affects younger adults, males, and the non-Hispanic white race out of proportion to the general population. About 1 in 5 EoE patients have asthma which is roughly 3 times higher than the general population supporting the association. GERD was the presenting complaint for nearly twice as many visits compared to dysphagia, a unique finding compared to previous studies. Most patients were on a PPI and nearly one-third were on topical steroids. Additional large scale, unbiased, population-based studies are needed to provide epidemiologic clarity concerning EoE.