P1165 (S2053). - When Common Symptoms Stem From an Uncommon Etiology: A Case Report Involving the Gastrointestinal Manifestations of Systemic Mastocytosis 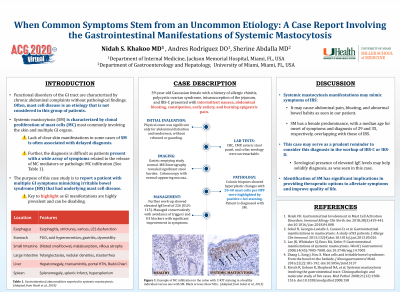 Introduction: Systemic mastocytosis (SM) is characterized by clonal proliferation of mast cells (MC) most commonly involving skin, but also multiple other organs, including the gastrointestinal (GI) tract. Lack of clear dermatologic manifestations in some cases of SM is often associated with delayed diagnosis. The purpose of this report is to demonstrate that SM can present with multiple GI symptoms mimicking irritable bowel syndrome (IBS).

Methods: A 39-year-old woman with a history of allergic rhinitis presented with nausea, bloating, constipation, and epigastric pain. She had been diagnosed with IBS; however, her symptoms were worsening despite implementing lifestyle modifications. Previous colonoscopies were reportedly normal and her physical exam was unremarkable. Further, enteric stool panel and tissue transglutaminase antibodies were normal. Imaging revealed a normal gastric emptying study and MR enterography only showed increased stool burden. Colonoscopy was grossly normal with colonic biopsies showing mucosal edema and 30-40 MC/HPF with positive c-KIT staining. Allergy testing was positive for environmental allergies and an elevated IgE level of 228 kU/L. Symptoms improved with a 30-food elimination diet.

Discussion: Systemic mastocytosis manifestations may mimic those of IBS and it is thought that MC activation may lead to abnormal gut motility. This may cause abdominal pain, bloating, and abnormal bowel habits, often regarded as hallmark symptoms for IBS. SM has a female predominance, with a median age for onset of symptoms and diagnosis of 29 and 35, respectively, overlapping with those of IBS. The most commonly involved GI sites in SM are the distal small bowel and colon, but gastric involvement may occur. Histologic involvement is often subtle, with no specific number of MC/HPF that distinguishes IBS from SM. Pathological staining with c-KIT and CD-25 are markers for SM. The role of MC in GI disease may be under-appreciated and this case may serve as a prudent reminder to consider this diagnosis in the workup of IBS. Relevant co-morbidities include IgE-dependent allergies. Identification of SM has significant implications in providing therapeutic options to alleviate symptoms and improve quality of life.