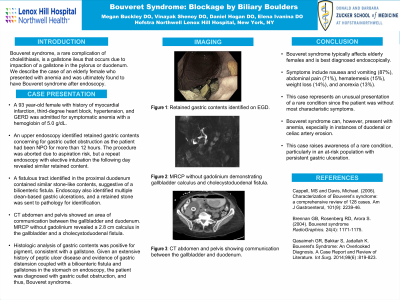 Introduction: Bouveret syndrome, a rare complication of cholelithiasis, is a gallstone ileus that occurs due to impaction of a gallstone in the pylorus or duodenum. We describe the case of an elderly female who presented with anemia and was found to have Bouveret syndrome after endoscopy.

Methods: A 93 year-old female with history of myocardial infarction, third-degree heart block, hypertension, and GERD presented with fatigue and was admitted for symptomatic anemia with a hemoglobin of 5.0 g/dL. Eighteen months prior, the patient had been hospitalized for an upper GI bleed and multiple gastric ulcers were found on the endoscopy with no clear etiology. At this presentation, the patient was admitted for anemia, but hemodynamically stable with no melena, hematochezia, or hematemesis. An upper endoscopy identified retained gastric contents presumed to be undigested food concerning for gastric outlet obstruction as the patient had been NPO for more than 12 hours. The procedure was aborted due to aspiration risk, but a repeat endoscopy with elective intubation the following day revealed similar retained content. A fistulous tract identified in the proximal duodenum contained similar stone-like contents, suggestive of a bilioenteric fistula. Endoscopy also identified multiple clean-based gastric ulcerations, and a retained stone was sent to pathology for identification. CT abdomen and pelvis showed an area of communication between the gallbladder and duodenum. MRCP without gadolinium revealed a 2.8 cm calculus in the gallbladder and a cholecystoduodenal fistula. Histologic analysis of gastric contents was positive for pigment, consistent with a gallstone. Given an extensive history of peptic ulcer disease and evidence of gastric distension coupled with a bilioenteric fistula and gallstones in the stomach on endoscopy, the patient was diagnosed with gastric outlet obstruction, and thus, Bouveret syndrome.

Discussion: Bouveret syndrome typically affects elderly females and is best diagnosed endoscopically. Symptoms include nausea and vomiting (87%), abdominal pain (71%), hematemesis (15%), weight loss (14%), and anorexia (13%). This case represents an unusual presentation of a rare condition since the patient was without most characteristic symptoms. Bouveret syndrome can, however, present with anemia, especially in instances of duodenal or celiac artery erosion. This case raises awareness of a rare condition, particularly in an at-risk population with persistent gastric ulceration. 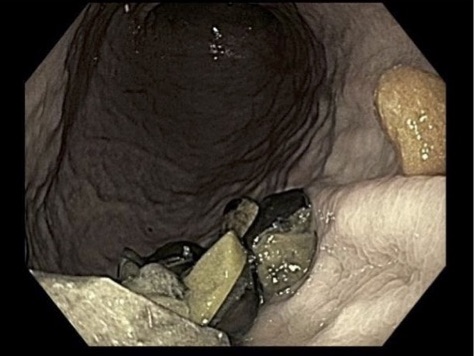 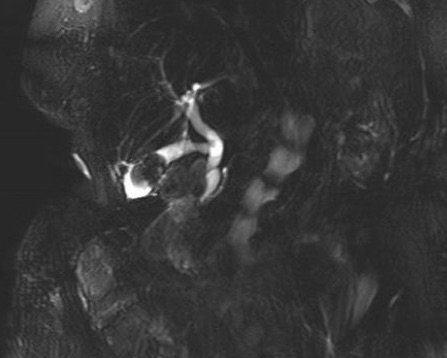 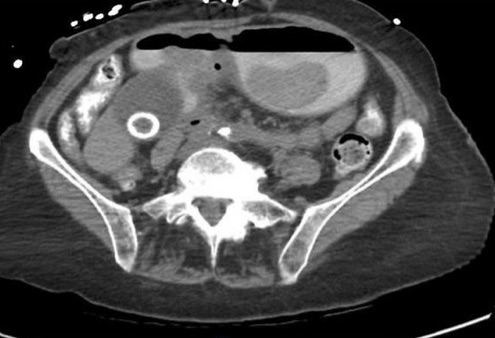 CT abdomen and pelvis showing communication between the gallbladder and duodenum