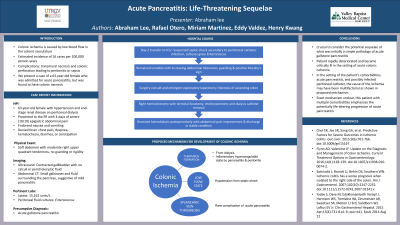 Introduction: Colonic ischemia is a potentially life-threatening condition caused by low blood flow in the colonic vasculature. We present a case of an initially stable patient with gallstone pancreatitis that rapidly deteriorated and was found to have colonic ischemia requiring surgical intervention.

Methods: A 63-year-old female with hypertension and end-stage renal disease on peritoneal dialysis presented to the ER with 3-days of severe epigastric abdominal pain. She endorsed nausea and vomiting but denied fever, chest pain, diarrhea, or constipation. Physical exam showed a soft abdomen, with moderate right upper quadrant tenderness and no guarding or rigidity. Ultrasound revealed a contracted gallbladder with no calculi. Abdominal CT scan showed small gallstones and fluid surrounding the pancreas, suggestive of mild pancreatitis and lipase was 15,162 units/L. Treatment was subsequently started for acute gallstone pancreatitis.

On admission day 2 the patient was transferred to the ICU for suspected septic shock secondary to a peritoneal catheter infection with peritoneal fluid cultures growing Enterococcus. She remained unstable despite fluid resuscitation. Serial physical exams showed rapidly increasing abdominal distension, abdominal guarding and positive Murphy’s sign. Surgery was consulted and recommended an emergent exploratory laparotomy which revealed necrosis of the ascending colon, for which a right hemicolectomy with terminal ileostomy was performed. Her gallbladder and dialysis catheter were removed. The patient received hemodialysis postoperatively, her abdominal pain improved and was discharged in stable condition.

Discussion: It was crucial to consider the potential sequelae of a simple pathology of acute pancreatitis. Our patient was initially stable and became critically ill. Considering the patient’s comorbidities, acute pancreatitis, and possibly infected peritoneal catheter, the cause of the ischemia may have been multifactorial. Mechanisms that may have contributed to her colonic ischemia are thrombus formation from dialysis, an inflammatory hypercoagulable state due to pancreatitis and SBP, and a low flow state secondary to hypotension from septic shock. Splanchnic vein thrombosis is also a rare complication of acute pancreatitis that has been reported to cause bowel ischemia. While the exact mechanism is unclear, this patient with multiple comorbidities emphasizes the potentially life-altering progression of acute pancreatitis.