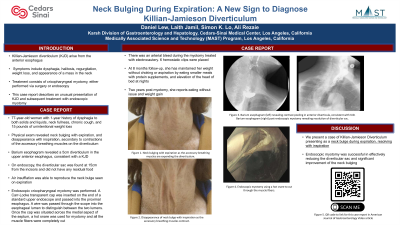 Introduction: Killian-Jamieson diverticulum (KJD) arise from the anterior esophagus, in contrast to Zenker’s diverticula (ZD) which arise from the posterior esophagus. Moreover, KJD occur less frequently than ZD. Symptoms include dysphagia, halitosis, regurgitation, weight loss, and appearance of a mass in the neck. Serious complications include aspiration pneumonia and fistula formation between the diverticula and trachea. Treatment consists of cricopharyngeal myotomy either performed via surgery or endoscopy. This case report describes an unusual presentation of KJ diverticula and subsequent treatment with endoscopy myotomy.

Methods: A 77-year-old woman presented with a 1-year history of dysphagia to both solids and liquids, neck fullness, chronic cough, and 15 pounds of unintentional weight loss. Physical examination revealed neck bulging with expiration, and disappearance with inspiration, secondary to contractions of the accessory breathing muscles on the diverticulum. No subcutaneous emphysema or thyroid enlargement was detected. Barium esophagram revealed a 5cm diverticulum in the upper anterior esophagus, consistent with a KJD. On endoscopy, the diverticular sac was found at 15cm from the incisors and did not have any residual food. Air insufflation was able to reproduce the neck bulge seen on expiration. Endoscopic cricopharyngeal myotomy was performed. A Carr-Locke transparent cap was inserted on the end of a standard upper endoscope and passed into the proximal esophagus. A wire was passed through the scope into the esophageal lumen to distinguish between the two lumens. Once the cap was situated across the medial aspect of the septum, a hot snare was used for myotomy and all the muscle fibers were completely cut. There was an arterial bleed during the myotomy treated with electrocautery. 6 hemostatic clips were placed.  At 8 months follow-up, she has maintained her weight without choking or aspiration by eating smaller meals with protein supplements, and elevation of the head of bed at nights. Two years post myotomy, she reports eating without issue and weight gain.

Discussion: We present a case of KJD successfully treated with endoscopic myotomy. Presence of neck bulging during expiration resolving with inspiration has not been reported in the literature before and should raise the possibility of KJD. Endoscopic management of KJD consists of myotomy similar to management of ZD. Complications can include bleeding and perforation.