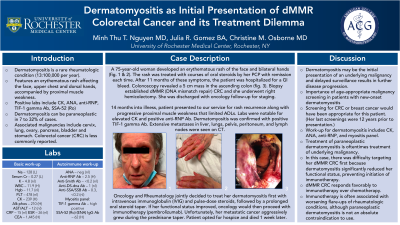 Introduction: Dermatomyositis is a rare rheumatological condition that affects 1/100,000 people per year. The inflammatory myopathy is characterized by a rash affecting the face and hands accompanied by proximal muscle weakness. It can be paraneoplastic in 7 to 32% of cases. Frequently associated malignancies include the cervix, lungs, ovaries, pancreas, bladder, and stomach. Colorectal cancer (CRC) is less commonly linked. This is a rare case of deficient mismatch repair (dMMR) CRC and paraneoplastic dermatomyositis.

Methods: A 75 year-old woman developed an erythematous rash of the face and bilateral hands fourteen months prior to admission. The rash was treated with courses of oral steroids by her PCP with remission each time. Three months ago, the patient was hospitalized for a GI bleed. Colonoscopy revealed a 5 cm mass in the ascending colon. Biopsy established dMMR CRC, and she underwent right hemicolectomy. She was discharged with oncology follow-up for staging.

Patient presented to the hospital for recurrence of the rash, along with progressive proximal muscle weakness that limited daily living. Labs were notable for elevated CK and positive anti-RNP Ab. Dermatomyositis was confirmed with positive TIF-1 gamma Ab. Extensive metastatic disease in liver, lungs, pelvis, peritoneum, and lymph nodes was seen on CT scans. Oncology and rheumatology jointly decided to treat her dermatomyositis first with intravenous immunoglobulin (IVIG) and pulse-dose steroids, followed by a prolonged oral steroid taper. If she achieved improved functional status, oncology would then proceed with immunotherapy (pembrolizumab). Unfortunately, her metastatic cancer aggressively grew during the prednisone taper. Patient opted for hospice and passed away one week later.

Discussion: There is utmost importance of comprehensive malignancy screening in age-appropriate patients with new-onset dermatomyositis. It may be the initial presentation of an underlying malignancy and delay in surveillance results in further progression. Treatment of paraneoplastic dermatomyositis is oftentimes treatment of the underlying malignancy. dMMR CRC responds favorably to immunotherapy over chemotherapy. In this case, there was difficulty targeting her dMMR CRC first because dermatomyositis significantly reduced her functional status, preventing initiation of immunotherapy. In addition, immunotherapy is associated with worsening flare-ups of autoimmune conditions, although it is not an absolute contraindication. 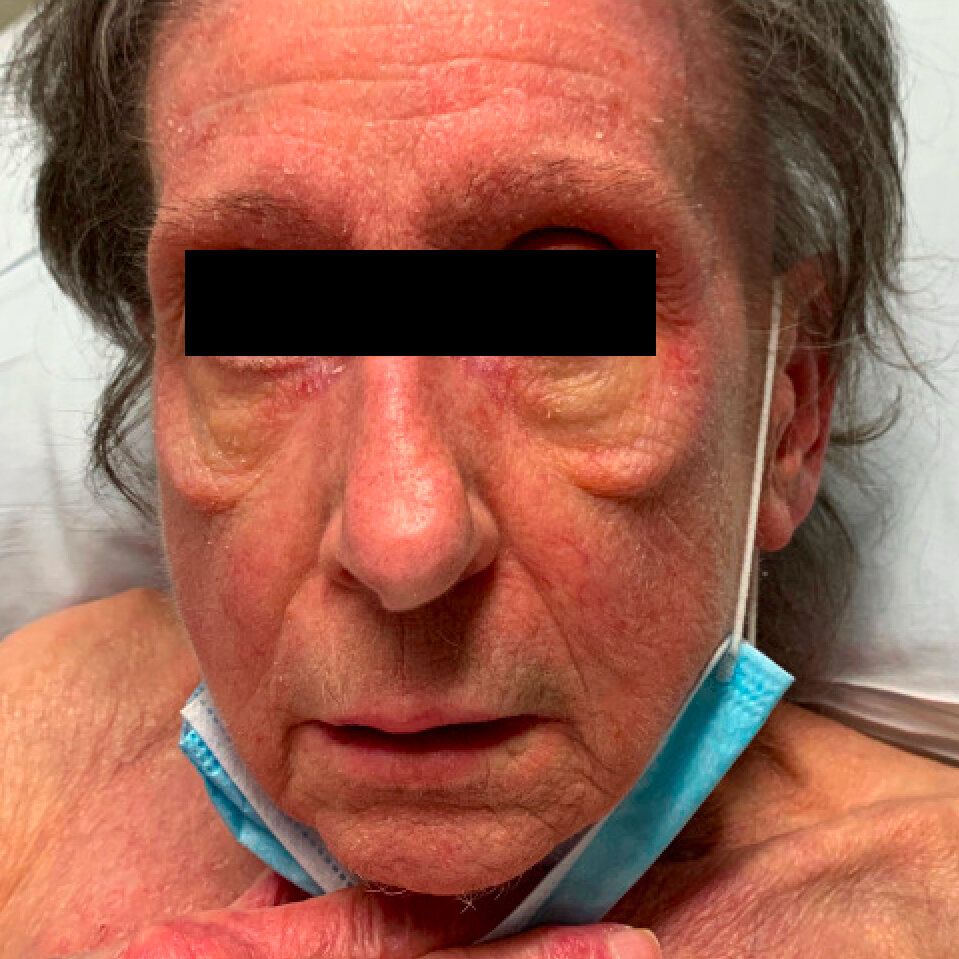 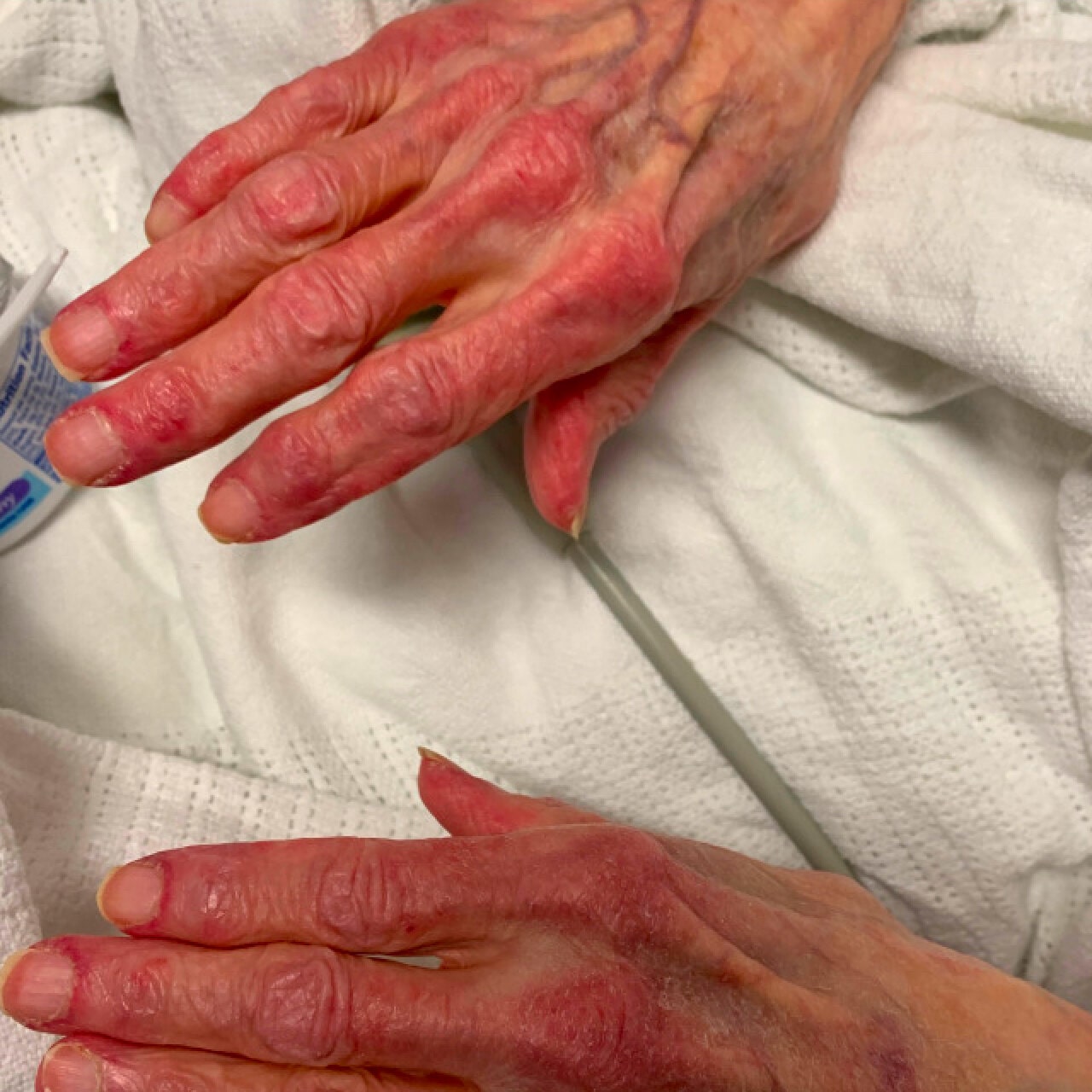 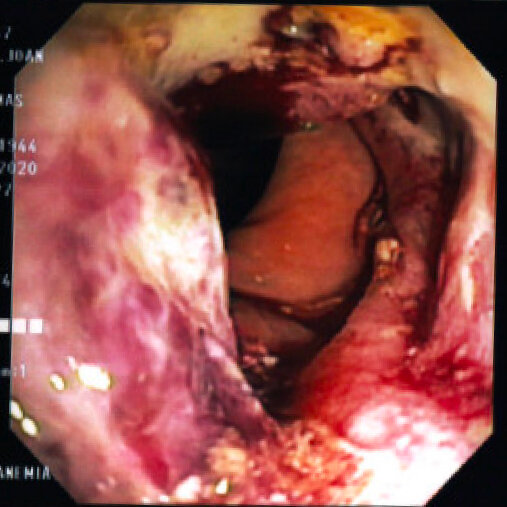 Colonoscopy revealed a 5 cm mass in the ascending colon.