P1194 (S0548). - Assessment of the Quality of Upper Endoscopy Procedures Performed for Gastric Ulcers in a Tertiary Care Facility 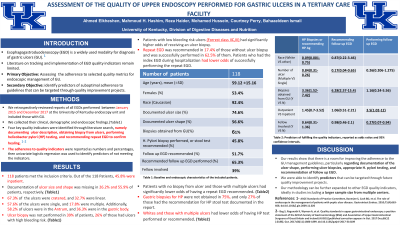 Introduction: Although esophagogastroduodenoscopy (EGD) is a widely used modality, literature on tracking and implementation of its quality indicators remain limited. Moreover, there is some discrepancy among the societies recommendations, for example, regarding universal necessity of obtaining biopsy and repeat exam for gastric ulcer (GU). In this concise study, we assessed the adherence to selected quality metrics for endoscopic management of GU; namely documentation of ulcer description, obtaining biopsy from ulcer, helicobacter pylori (HP) testing, and recommending repeat EGD to confirm healing.

Methods: We retrospectively reviewed reports of all EGDs performed on adults between January 2015 and December 2017 at the University of Kentucky endoscopy unit and included those with GU. After collecting their clinical, demographic and endoscopic findings, the quality indicators were reported as numbers and percentages. We then performed a univariate logistic regression analysis to identify significant predictors of not meeting each quality indicator.

Results: A total of 118 patients met the inclusion criteria (table 1).  Documentation of ulcer size and shape was missing in 26.2% and 55.9% of patients respectively. Ulcer biopsy was not performed in 39% of patients (26% of those had ulcers with high bleeding risk). Patients with low risk ulcers had significantly higher odds of receiving an ulcer biopsy (table 2). Repeat EGD was recommended in 17.4% of those without ulcer biopsy on the index EGD and was successfully performed in 62.5% of them. Those who did not have biopsy from ulcer and those with multiple ulcers had significantly lower odds of having a repeat EGD recommended. We also noted lower odds of successfully performing the repeat EGD in those who had the index endoscopy during hospitalization. Gastric biopsies for HP were not obtained in 75%, and only 27% of those had the recommendation for HP stool test documented in the report.  Whites and those with multiple ulcers had lower odds of having HP test performed or recommended.

Discussion: Our results suggest that there is a room for improvement in the quality of endoscopy for GU. Additionally, we identified predictors that can be targeted through future quality improvement projects. Our methodology can be further expanded to other EGD quality indicators, ideally in studies including a larger sample size from multiple centers. 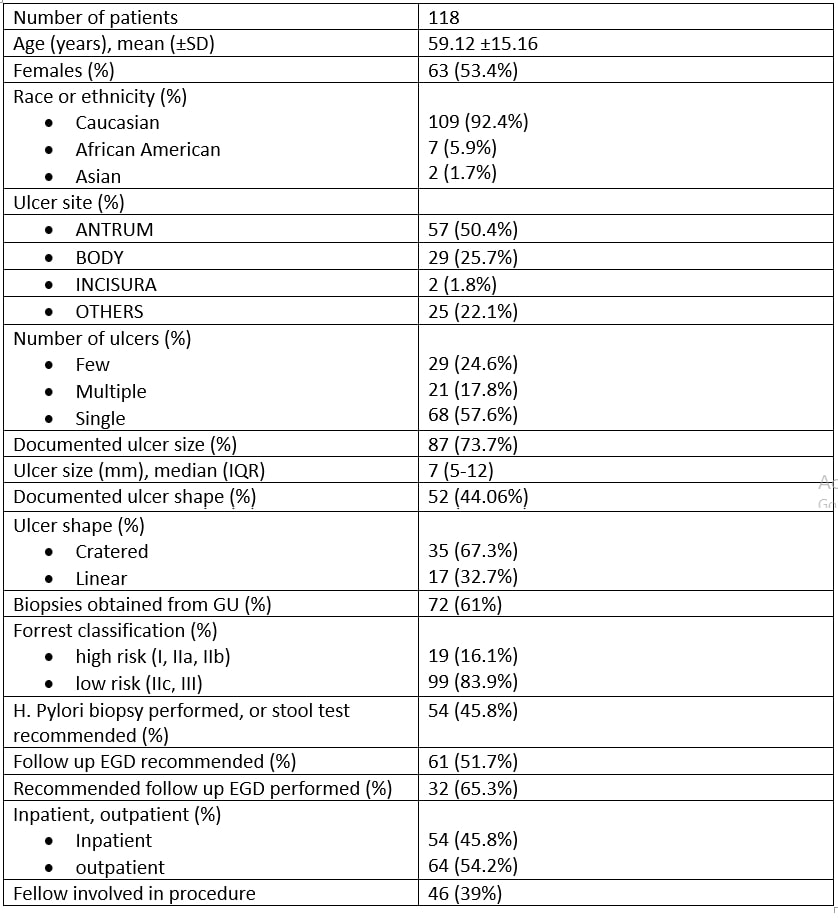 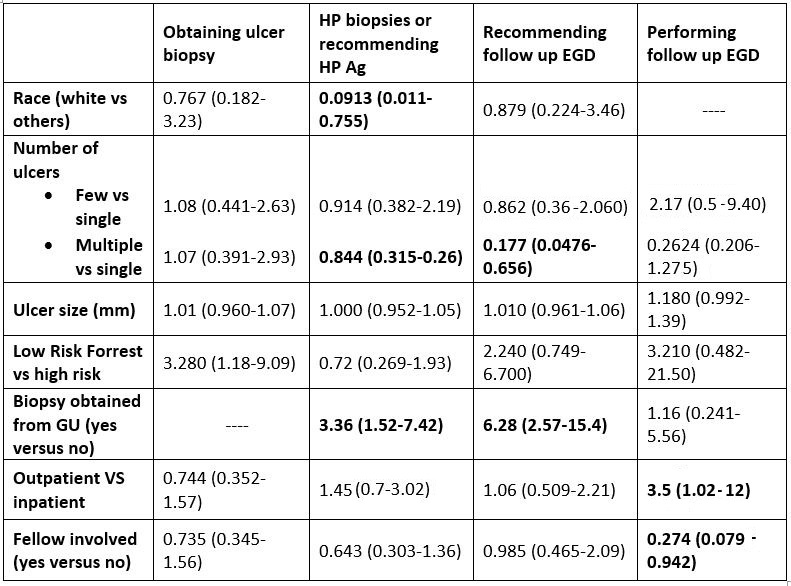