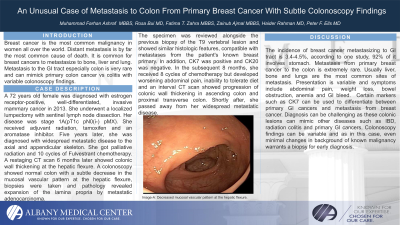 Introduction: Breast cancer is the most common malignancy in women all over the world. Distant metastasis is by far the most common cause of death. It is common for breast cancers to metastasize to bone, liver and lung. Metastasis to the GI tract especially colon is very rare and can mimick primary colon cancer vs colitis with variable colonoscopy findings.

Methods: A 72 years old female was diagnosed with estrogen receptor-positive, well-differentiated, invasive mammary cancer in 2013. She underwent a localized lumpectomy with sentinel lymph node dissection. Her disease was stage 1A(pT1c pN0(i-) pMX). She received adjuvant radiation, tamoxifen and an aromatase inhibitor. Five years later, she was diagnosed with widespread metastatic disease to the axial and appendicular skeleton. She got palliative radiation and 10 cycles of Fulvestrant chemotherapy. A restaging CT scan 6 months later showed colonic wall thickening at the hepatic flexure. A colonoscopy showed normal colon with a subtle decrease in the mucosal vascular pattern at the hepatic flexure, biopsies were taken and pathology revealed expansion of the lamina propria by metastatic adenocarcinoma. The specimen was reviewed alongside the previous biopsy of the T9 vertebral lesion and showed similar histologic features, compatible with metastases from the patient's known breast primary. In addition, CK7 was positive and CK20 was negative. In the subsequent 8 months, she received 8 cycles of chemotherapy but developed worsening abdominal pain, inability to tolerate diet and an interval CT scan showed progression of colonic wall thickening in ascending colon and proximal transverse colon. Shortly after, she passed away from her widespread metastatic disease.

Discussion: The incidence of breast cancer metastasizing to GI tract is 3.4-4.5%, according to one study, 92% of it involves stomach. Metastasis from primary breast cancer to the colon is extremely rare. Usually liver, bone and lungs are the most common sites of metastasis. Presentation is variable and symptoms include abdominal pain, weight loss, bowel obstruction, anemia and GI bleed.  Certain markers such as CK7 can be used to differentiate between primary GI cancers and metastasis from breast cancer. Diagnosis can be challenging as these colonic lesions can mimic other diseases such as IBD, radiation colitis and primary GI cancers. Colonoscopy findings can be variable and as in this case, even minimal changes in background of known malignancy warrants a biopsy for early diagnosis. 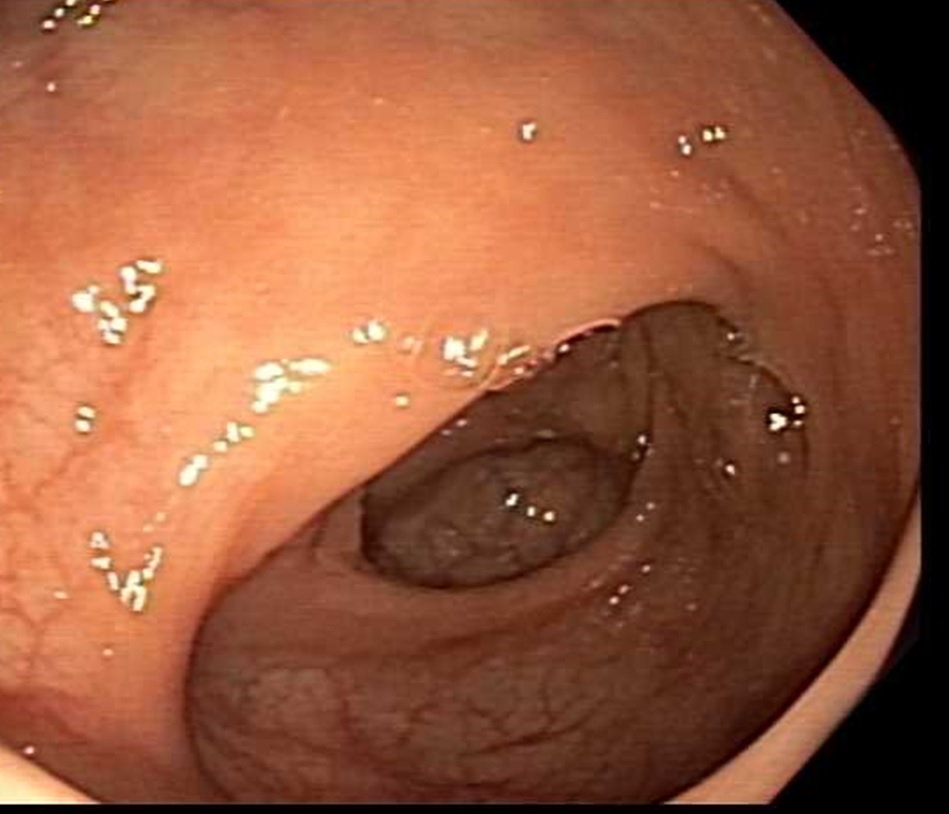