P0059 (S0065). - Changes in Incidence Rates and Mortality in Patients With Extrahepatic Cholangiocarcinoma Differ Among Races and Ethnicities 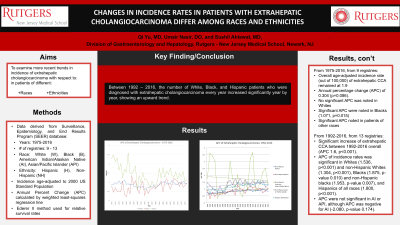 Methods: Patients with extrahepatic CCA recorded in the SEER database from 1975-2016 were characterized according to race (White, Black, American Indian/Alaska Native or AI, and Asian/Pacific Islander or API) and ethnicity (Hispanic, non-Hispanic). APC were calculated by fitting a least-squares regression line to the natural logarithm of the rates using the calendar year as a regressor variable. Relative survival rates were calculated using the Ederer II method.

Discussion: Although it is unclear whether or not the incidence of extrahepatic CCA has changed overall, this study suggests that the decrease in incidence of extrahepatic CCA in non-Black, non-White populations may be offset by an increase in other populations. Furthermore, non-Hispanic Whites and API appear to have an early survival advantage, though it is not sustained.