P1189 (S0543). - Charlson Comorbidity Index as a Potential Predictor for Identification of Dysplasia in Barrett’s Esophagus in Patients Referred for Volumetric Laser Endomicroscopy 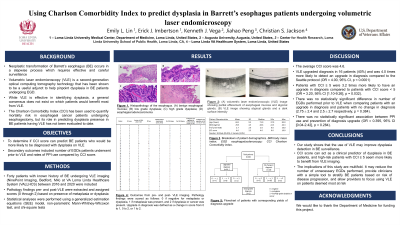 Introduction: Many technologies currently exist to identify advanced neoplasia in patients diagnosed with Barrett’s esophagus (BE). Volumetric laser endomicroscopy (VLE) is a second-generation optical computing tomography technology that has been shown to be a useful adjunct to help pinpoint dysplasia in BE patients undergoing esophagogastroduodenoscopy (EGD). Even though VLE is effective in identifying dysplasia, a general consensus does not exist on which patients would benefit most from VLE. The Charlson Comorbidity Index (CCI) is the comorbidity index most widely used by researchers. While CCI score has been used to quantify mortality risk in esophageal cancer patients undergoing esophagectomy, its role in predicting dysplasia presence in BE patients having VLE has not been evaluated to date. The primary aim of our study was to determine if CCI score could predict BE patients who would be more likely to be diagnosed with dysplasia on VLE.

Methods: Forty-one BE patients undergoing VLE imaging (NinePoint Imaging, Bedford, MA) during endoscopy at VA Loma Linda Healthcare System (VALLHCS) between 2016 and 2020 were included in this study.  Data collected included patient demographics, EGD results, number of EGDs prior to VLE, pathology pre- and post-VLE, and CCI scores. BE neoplasia was defined as “loss of layering or presence of dilated irregular glands” on VLE. Pathology specimens were reviewed by a second pathologist when there was suspicion for dysplasia. Primary outcome measures were number of EGDs patients underwent prior to VLE, as well as pathology findings from pre- and post-VLE compared by CCI.

Results: The average age of the patients included and CCI score was 69 years old and 4.5 respectively.  Patients underwent an average of two EGDs prior to undergoing VLE.  Thirteen of the 41 (32%) patients were noted to have dysplasia or signs of BE at time of VLE. VLE identified dysplasia in 4 out of 13 patients (30.7%). When comparing patients with CCI score ≤ 4 to CCI score > 4, those with CCI > 4 were more likely to have a loss of layering (p = 0.013) and dysplasia detected on VLE (p = 0.02).

Discussion: BE patients with more comorbidities have an increased frequency of abnormal findings on VLE and are more likely to benefit from undergoing VLE imaging at BE endoscopy compared to those with fewer comorbidities. These results appear to support CCI score use as a predictor of dysplasia in BE patients.