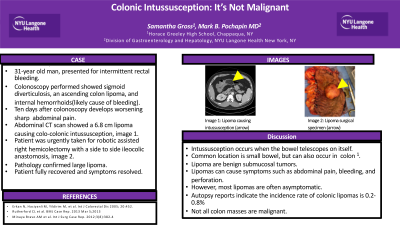 Introduction: Lipomas are benign submosal lesions, which can be found throughout the gastrointestinal tract.  In most patients, these are incidentals findings and patients are asymptomatic.  However, there are instances when lipomas can cause symptoms of obstruction if very large.  This case highlights a rare complication of a colonic lipoma.

Methods: The case is of a 31-year-old man, who initially presented for intermittent rectal bleeding.  On initial evaluation he had a benign abdominal exam, but a rectal exam was performed suggested hemorrhoids.  There was no significant past medical history and no family history of colon cancer.  A colonoscopy was performed demonstrating sigmoid diverticulosis, an ascending colon lipoma, and  internal hemorrhoids, the likely cause of bleeding.  Ten days later the patient calls with intermittent abdominal pain for the last several days.  On further questioning, the patient does report occasional episodes of a similar sharp pain for the last few years, but in the last few days the pain has intensified.  An outpatient CT scan was performed showing a 6.8 cm lipoma in the transverse colon causing colo-colonic intussusception (image 1). The patient was taken for urgent robotic right hemicolectomy with a side to side ileocolic anastomosis.    Final pathology confirmed a large lipoma.  The patient fully recovered and symptoms have resolved.

Discussion: Intussusception is when the bowel telescopes on itself.  The most common location is the small bowel, but intussusception can occur in the colon 1.  A lipoma is a benign submucosal tumor, which can be found in the colon.  In the majority of cases lipomas are incidental finding and cause no symptoms.  Based on autopsy reports, the incidence rate of colonic lipomas is 0.2-0.8%. However, clinical symptoms might include abdominal pain, bleeding, and perforation.  Clinicians should be aware of this unique presentation, which requires surgical intervention. 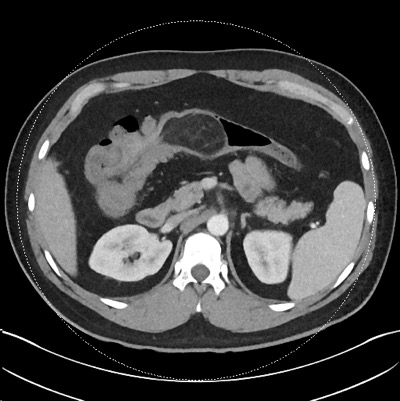 Intussusception at level of transverse colon