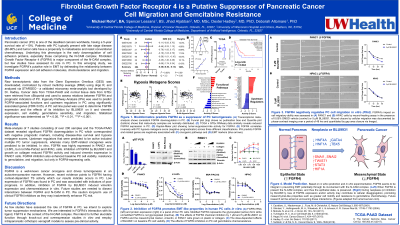 Introduction: Pancreatic cancer (PC) is one of the deadliest cancers worldwide, having a 5-year survival rate of ~10%. Patients with PC typically present with late stage disease (80-90%) and tumor cells have a propensity to metastasize and resist conventional chemotherapy. Underlying this phenotype is the early downregulation of cell adhesion proteins, especially those comprising the N-CAM complex. Fibroblast Growth Factor Receptor 4 (FGFR4) is major component of the N-CAM complex, but few studies have assessed its role in PC. In this emerging study, we investigate FGFR4’s putative role in mediating PC cell migration and chemoresistance.

Methods: Transcriptomic data from TCGA, GTEx, and GEO were analyzed using STARGEO, a validated RNAseq meta-analysis tool developed in-house, to assess FGFR4 expression and prognostication in PC. Ingenuity Pathway Analysis was then used to predict FGFR4-associated functions and upstream regulators in PC. A panel of PC cells was used to determine expression of FGFR4 and the effects of its inhibition by BLU9931 on epithelial-mesenchymal transition (EMT), viability, gemcitabine sensitivity, and migration.

Discussion: FGFR4 is a well-known cancer oncogene and drives tumorigenesis in an autocrine-paracrine manner. However, recent evidence points to FGFR4 having context-dependent TS activity which we show occurs in PC. Low expression of FGFR4 was found in PC and was associated with poor prognosis and inhibition of FGFR4 by BLU9931 induced PC cell EMT and chemoresistance. Future studies are needed to test if early PC metastasis could be suppressed by therapeutic FGFR4 agonism. We also caution long-term use of clinical FGFR4 inhibitors for treating cancer as they may inadvertently enhance PC risk. 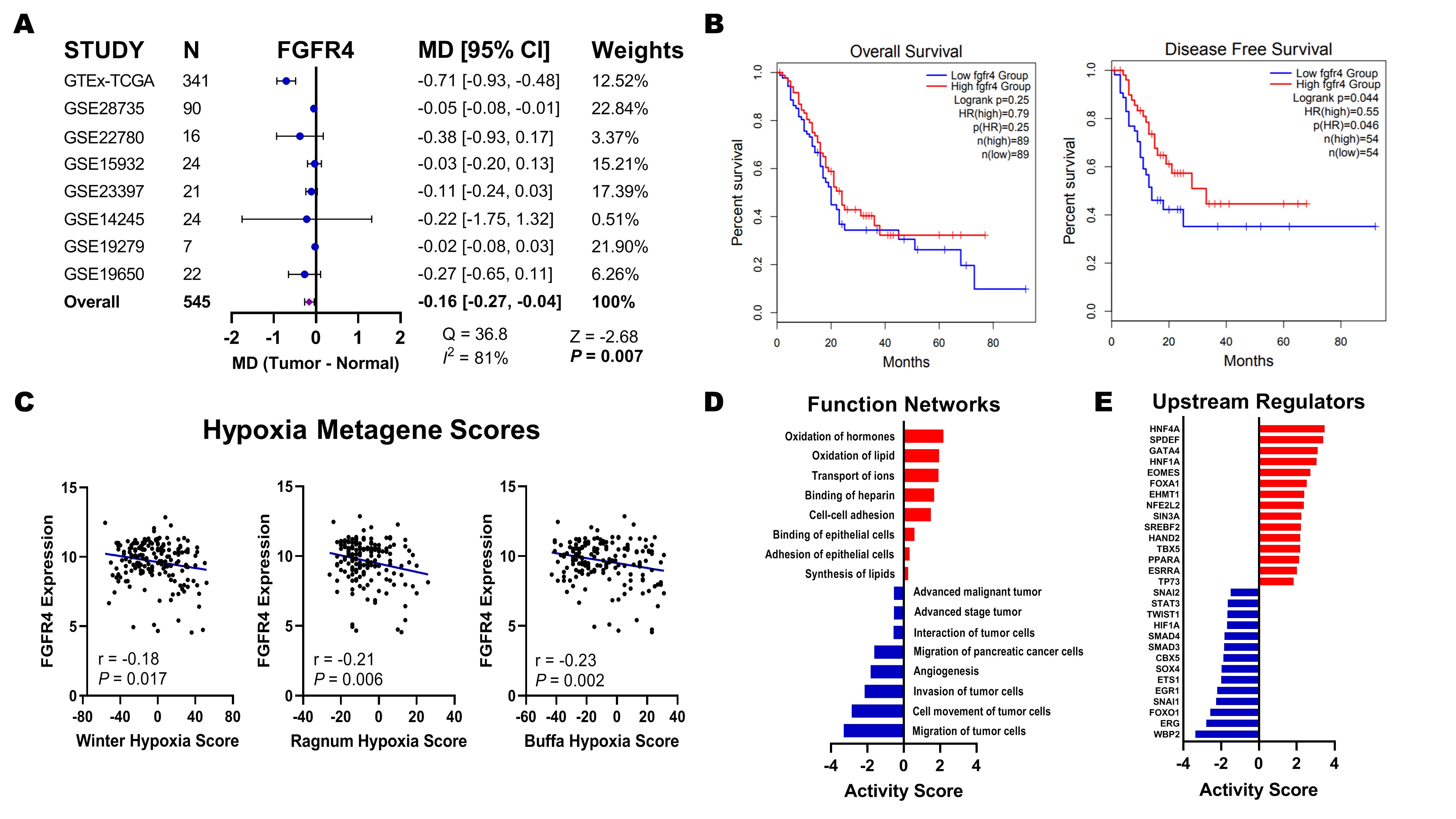 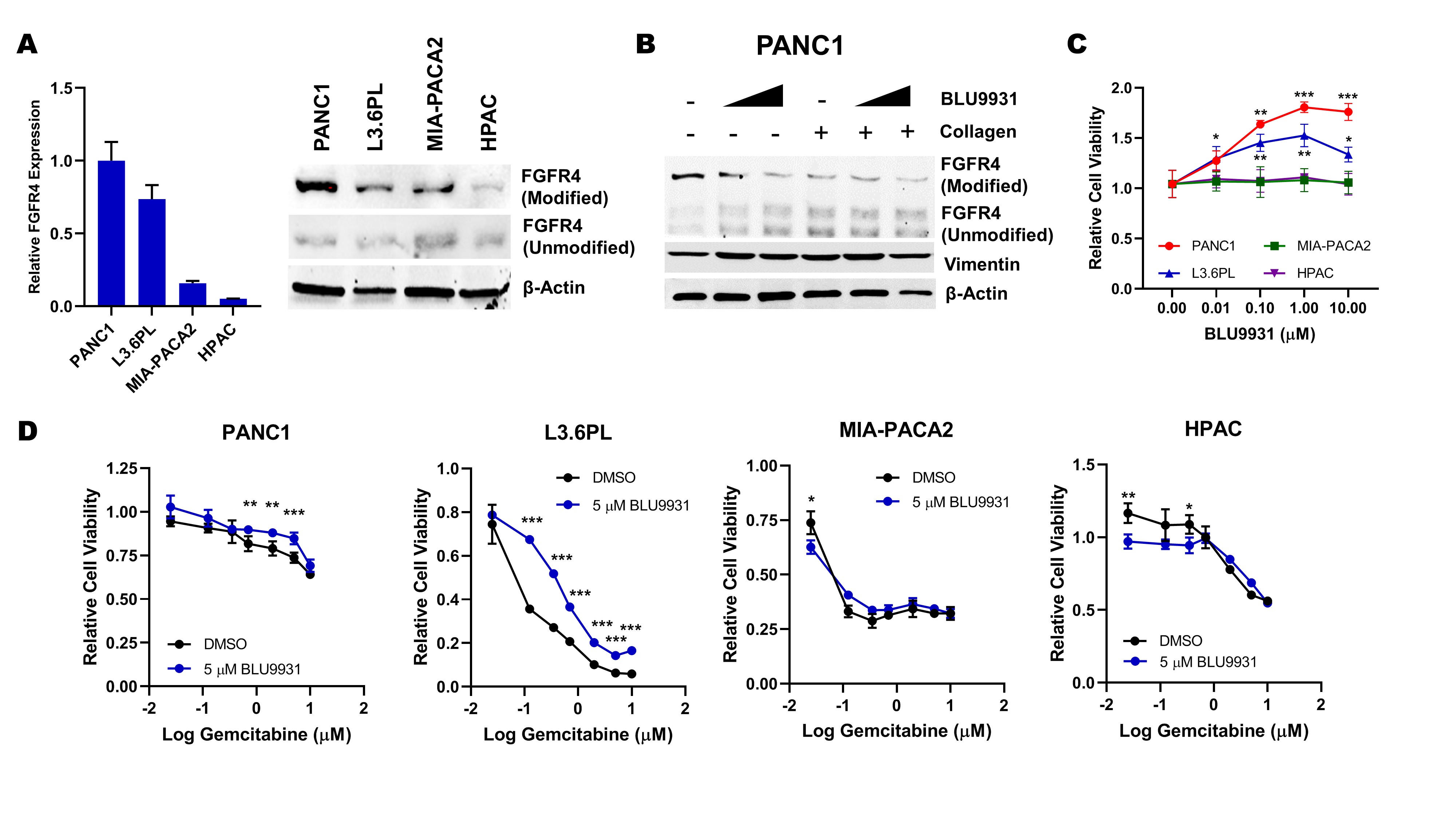 Figure 2. Inhibition of FGFR4 promotes PC cell EMT and gemcitabine chemoresistance in vitro. (A) FGFR4 RNA and protein expression was assessed in a panel of four PC cell lines via qRT-PCR and western blot, respectively. Modified FGFR4 represents the glycosylated (active) form while unmodified FGFR4 is not glycosylated (inactive). (B) The effects of chemical inhibition of FGFR4 by BLU9931 (specific antagonist) on vimentin (EMT marker) was assessed in PANC1 cells grown on plastic or collagen. (C) The effects of BLU9931 on PC cell viability was tested by MTS assay, revealing dose-dependent elevation of cell viability only in FGFR4-expressing cells (PANC1 and L3.6PL). (D) The effects of FGFR4 inhibition on chemoresistance was assessed by treating PC cells with increasing concentration of gemcitabine in the presence or absence of 5 µM BLU9931 for 48 hrs; cell viability was analyzed as before. All results are from three independent experiments and significance was determined using Student’s T-test. *P<0.05, **P<0.01, ***P<0.001. 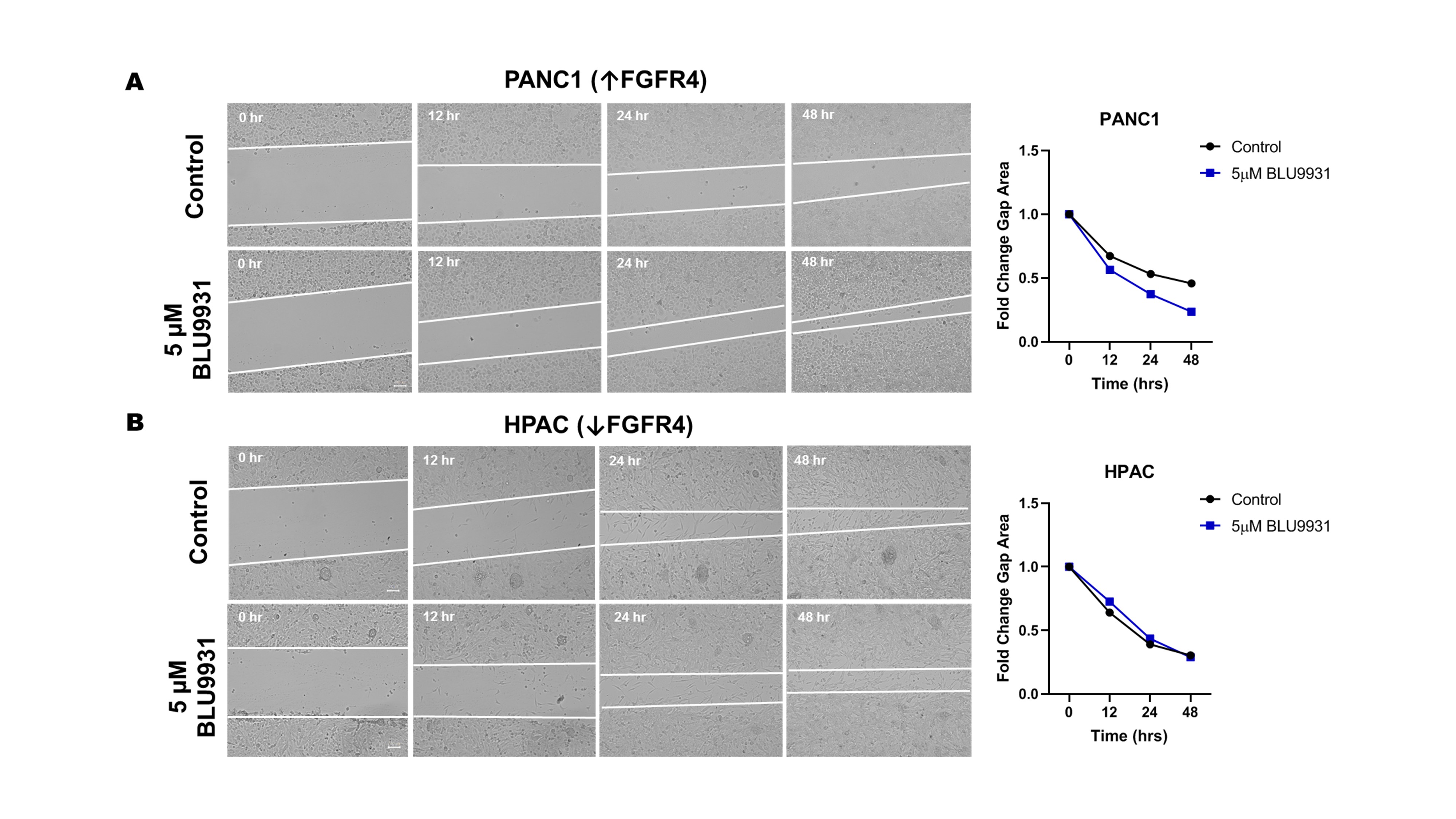 Figure 3. FGFR4 negatively regulates PC cell migration in vitro. FGFR4’s impact on cell migratory ability was assessed in (A) PANC1 and (B) HPAC cells by wound-healing assay in the presence of DMSO vehicle (control) or 5 µM BLU9931. Wound closure by cellular migration was documented by phase-contrast imaging over a period of 48 hrs and quantitated by gap area closure via ImageJ.