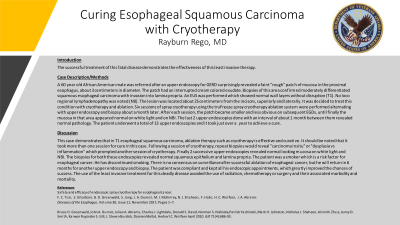 Introduction: The successful treatment of this fatal disease demonstrates the effectiveness of this least invasive therapy.

Methods: A 60 year old African American male was referred after an upper endoscopy for GERD surprisingly revealed a faint "rough" patch of mucosa in the proximal esophagus, about 3 centimeters in diameter. The patch had an interrupted cream colored exudate. Biopsies of this area confirmed moderately differentiated squamous esophageal carcinoma with invasion into lamina propria. An EUS was performed which showed normal wall layers without disruption (T1). No loco regional lymphadenopathy was noted (N0) .The lesion was located about 25 centimeters from the incisors, superiorly and laterally. It was decided to treat this condition with cryotherapy and ablation. Six sessions of spray cryotherapy using the truFreeze spray cryotherapy ablation system were performed alternating with upper endoscopy and biopsy about a month later. After each session, the patch became smaller and less obvious on subsequent EGDs, until finally the mucosa in that area appeared normal on white light and on NBI. The last 2 upper endoscopies done with an interval of about 1 month between them revealed normal pathology. The patient underwent a total of 13 upper endoscopies and it took just over a  year to achieve a cure.

Discussion: This case demonstrates that in T1 esophageal squamous carcinoma, ablation therapy such as cryotherapy is effective and curative. It should be noted that it took more than one session for cure in this case. Following a session of cryotherapy, repeat biopsies would reveal "carcinoma in situ" or "dysplasia vs inflammation" which prompted another session of cryotherapy. Finally 2 successive upper endoscopies revealed normal looking mucosa on white light and NBI. The biopsies for both these endoscopies revealed normal squamous epithelium and lamina propria. The patient was a smoker which is a risk factor for esophageal cancer. He has discontinued smoking. There is no consensus on surveillance after successful ablation of esophageal cancer, but he will return in 6 months for another upper endoscopy and biopsy. The patient was compliant and kept all his endoscopic appointments, which greatly improved the chances of success. The use of the least invasive treatment for this deadly disease avoided the use of radiation, chemotherapy or surgery and their associated morbidity and mortality. Patch of abnormal mucosa in the proximal esophagus