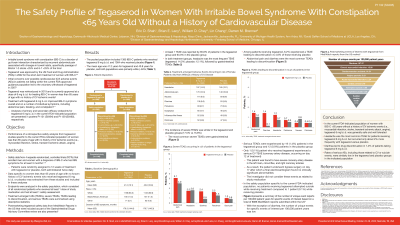 Introduction: Tegaserod was recently reintroduced for treating irritable bowel syndrome with constipation (IBS-C) in women < 65 years without a history of cardiovascular disease (CVD). Initial concerns over possible cardiovascular adverse events (AEs) in patients who did not fall within current regulatory guidelines led to its withdrawal in 2007. Therefore, we provide an overall safety analysis from tegaserod studies specific to the FDA-indicated population.

Discussion: In the FDA-indicated population of women with IBS-C < 65 years without a history of CVD, tegaserod 6 mg BID was generally well tolerated. Headache was the most common TEAE for subjects receiving tegaserod 6 mg BID but occurred in only ~2% more subjects than PBO. Diarrhea led to drug discontinuation in a low number of patients taking tegaserod 6 mg BID. There were no significant differences in rates of serious AEs including those related to suicide events within this population.