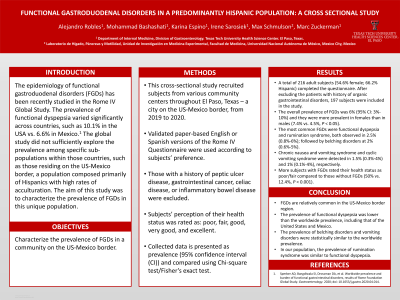 Introduction: The epidemiology of functional gastroduodenal disorders (FGDs) has been recently studied in the Rome IV Global Study. The prevalence of functional dyspepsia varied significantly across countries, such as 10.1% in the USA vs. 6.6% in Mexico (Sperber et al. 2020). The global study did not sufficiently explore the prevalence among specific sub-populations within those countries, such as those residing on the US-Mexico border, a population composed primarily of Hispanics with high rates of acculturation. The aim of this study was to characterize the prevalence of FGDs in this unique population.

Methods: This cross-sectional study recruited subjects from various community centers throughout El Paso, Texas – a city on the US-Mexico border, from 2019 to 2020. Validated paper-based English or Spanish versions of the Rome IV Questionnaire were used according to subjects’ preference. Those with a history of peptic ulcer disease, gastrointestinal cancer, celiac disease, or inflammatory bowel disease were excluded. Subjects’ perception of their health status was rated as: poor, fair, good, very good, and excellent. Collected data is presented as prevalence (95% confidence interval (CI)) and compared using Chi-square test/Fisher’s exact test.