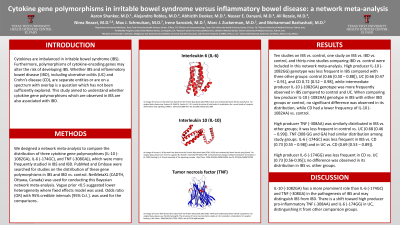 Introduction: Cytokines are imbalanced in irritable bowel syndrome (IBS) and polymorphisms of cytokine-encoding genes may alter the risk of developing IBS. Whether IBS and inflammatory bowel disease (IBD), including ulcerative colitis (UC) and Crohn’s disease (CD), are separate entities or are on a spectrum with overlap is a question which has not been sufficiently explored. This study aimed to understand whether cytokine gene polymorphisms which are observed in IBS are also associated with IBD.

Methods: We designed a network meta-analysis to compare the distribution of three cytokine gene polymorphisms that have been more frequently studied in IBS and IBD: IL-10 (-1082GA), IL6 (-174GC), and TNF-α (-308GA). PubMed and Embase were searched for studies on the distribution of these polymorphisms in IBS and IBD vs. control. NetMetaXL (CADTH, Ottawa, Canada) was used for conducting this Bayesian network meta-analysis. Vague prior < 0.5 suggested lower heterogeneity where fixed effects model was used. Odds ratio (OR) with 95% credible intervals [95% Cr.I.]. was used for the comparisons.