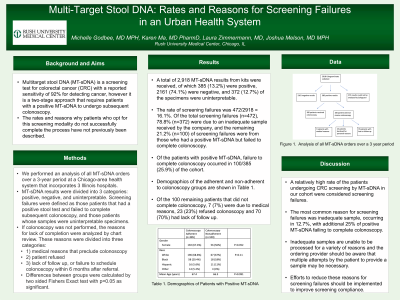 Introduction: Multitarget stool DNA (MT-sDNA) is a screening test for colorectal cancer (CRC) with a reported sensitivity of 92% for detecting cancer, however it is a two-stage approach that requires patients with a positive MT-sDNA to undergo subsequent colonoscopy. The rates and reasons why patients who opt for this screening modality do not successfully complete the process have not previously been described.

Methods: We performed an analysis of all MT-sDNA orders over a 3-year period at a Chicago-area health system that incorporates 3 Illinois hospitals. MT-sDNA results were divided into 3 categories: positive, negative, and uninterpretable. Screening failures were defined as those patients that had a positive stool test and failed to complete subsequent colonoscopy, and those patients whose samples were uninterpretable specimens.  If colonoscopy was not performed, the reasons for lack of completion were analyzed by chart review. These reasons were divided into three categories: 1) medical reasons that preclude colonoscopy, 2) patient refused, and 3) lack of follow up, or failure to schedule colonoscopy within 6 months after referral. Differences between groups were calculated by two sided Fishers Exact test with p=0.05 as significant. 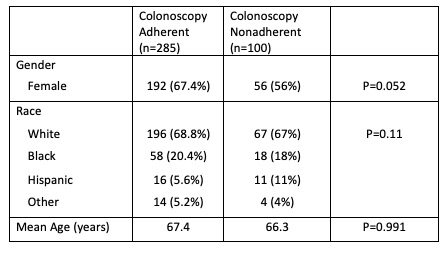