P0584 (S1706). - The Curious Case of Bannayan-Riley-Ruvalbcaba Syndrome: A Uncommon Genetic Presentation and Its Association With Celiac Disease 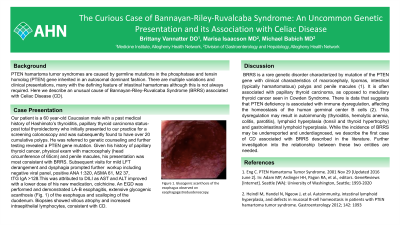 Introduction: PTEN harmatoma tumor syndromes are caused by germline mutations in the phosphatase and tensin homolog (PTEN) gene inherited in an autosomal dominant fashion. There are multiple variations and clinical presentations, many with the defining feature of intestinal harmatomas although this is not always required. Here we describe an unusual case of Bannayan-Riley-Ruvalcaba Syndrome (BRRS) associated with Celiac Disease (CD).

Methods: Our patient is a 60 year-old Caucasian male with a PMHx of Hashimoto’s thyroiditis, papillary thyroid carcinoma status-post total thyroidectomy who initially presented to our practice for a screening colonoscopy and was subsequently found to have multiple polyps (over 20 cumulative). He was referred to genetic counseling and further testing revealed a PTEN gene mutation. Given his history of papillary thyroid cancer, physical exam with macrocephaly (head circumference of 65 cm) and penile macules, his presentation was most consistent with BRRS.

Subsequent visits for mild LFT derangement and dysphagia prompted further workup including negative viral panel, positive ANA 1:320, ASMA 61, M2 37, tTG IgA >128. This was attributed to DILI as AST and ALT improved with a lower dose of his new medication, colchicine. An EGD was performed and demonstrated LA-B esophagitis, extensive glycogenic acanthosis (Fig. 1) of the esophagus and scalloping of the duodenum. Biopsies showed villous atrophy and increased intraepithelial lymphocytes, consistent with CD.

Discussion: BRRS is a rare genetic disorder characterized by mutation of the PTEN gene with clinical characteristics of macrocephaly, lipomas, intestinal (typically hamartomatous) polyps and penile macules. It is often associated with papillary thyroid carcinoma, as opposed to medullary thyroid cancer seen in Cowden Syndrome. There is data that suggests that PTEN deficiency is associated with immune dysregulation, affecting the homeostasis of human germinal center B cells. This dysregulation may result in autoimmunity (thyroiditis, hemolytic anemia, colitis, parotidits), lymphoid hyperplasia (tonsil and thyroid hypertrophy) and gastrointestinal lymphoid hyperplasia. While the incidence of BRRS may be underreported and underdiagnosed, we describe the first case of CD associated with BRRS described in the literature. Further investigation into the relationship between these two entities are needed. 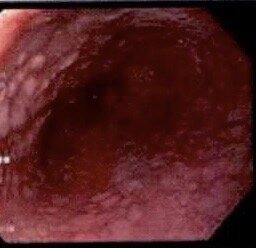 Extensive glycogenic acanthosis seen in the distal esophagus of our patient with Bannayan-Riley-Ruvalbaca Syndrome.