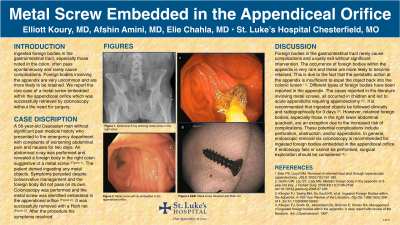 Introduction: Ingested foreign bodies in the gastrointestinal tract, especially those noted in the colon, often pass  spontaneously and rarely cause complications. Foreign bodies involving the appendix are very uncommon and are more likely to be retained. We report the rare case of a metal screw embedded within the appendiceal orifice which was successfully retrieved by colonoscopy without the need for surgery.

Methods: A 56-year-old Caucasian man without significant past medical history who presented to the emergency department with complaints of worsening abdominal pain and nausea for two days. An abdominal x-ray was performed and revealed a foreign body in the  right colon suggestive of a metal screw [Figure 1]. The patient denied ingesting any metal objects. Symptoms persisted despite conservative management and the foreign body  did not pass on its own. Colonoscopy was performed and the metal screw was identified embedded in the appendiceal orifice [Figure 2]. It was successfully removed with a Roth net [Figure 3]. After the procedure his symptoms resolved.

Discussion: Foreign bodies in the gastrointestinal tract rarely cause complications and usually exit without significant intervention. The occurrence of foreign bodies within the appendix is very rare and these are more likely to become retained. This is due to the fact that the peristaltic action at the appendix is insufficient to expel the object back into the colonic lumen. Different types of foreign bodies have been reported in the appendix. The cases reported in the literature involving metal screws, all occurred in children and led to acute appendicitis requiring appendectomy. It is recommended that ingested objects be followed clinically and radiographically for 3 days. However, retained foreign bodies, especially those in the right lower abdominal quadrant, are an exception due to the increased risk of complications. These potential complications include perforation, obstruction, and/or appendicitis. In general, endoscopic removal via colonoscopy is recommended for ingested foreign bodies embedded in the appendiceal orifice. If endoscopy fails or cannot be performed, surgical exploration should be considered. 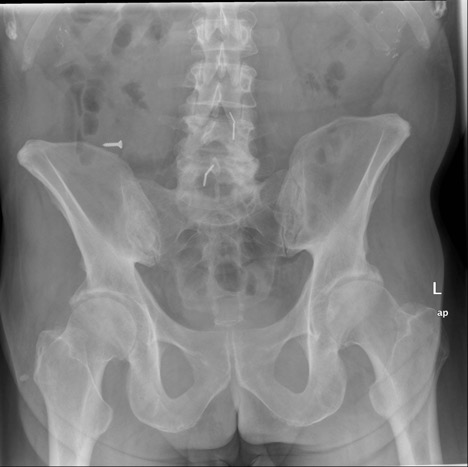 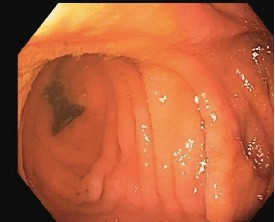 Figure 2. Metal screw with tip embedded in the appendiceal orifice.