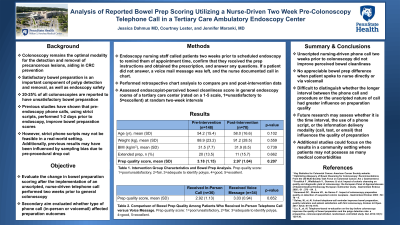 Introduction: Colorectal cancer is the third most common cause of cancer-related death in the United States. Colonoscopy remains the optimal modality for detection and removal of precancerous lesions. Satisfactory bowel preparation remains an important component of polyp detection, removal, and safety. Unfortunately, 20-25% of all colonoscopies are reported to have unsatisfactory bowel prep. Multiple studies have shown that pre-endoscopy phone calls improve prep scores. However, these calls are typically 1-2 days prior to colonoscopy, possibly inducing sample bias with improved cleanliness scores due to pre-procedural drop-out. Additionally, many studies follow strict scripts that may not be feasible to reproduce in a real-world setting. This study aimed to evaluate the change in bowel cleanliness utilizing a nurse-driven phone call made two weeks prior to general colonoscopy.

Discussion: Implementing an unscripted phone call two weeks prior to colonoscopy did not appear to improve bowel cleanliness. Additionally, there did not appear to be a difference between bowel cleanliness when calls consisted of direct conversation versus VM. Less strict interventions implemented at a longer interval prior to colonoscopy may not be as beneficial as those closer to scheduled endoscopy. Further research will evaluate whether it is the interval versus the type of information provided that most influences bowel cleanliness.