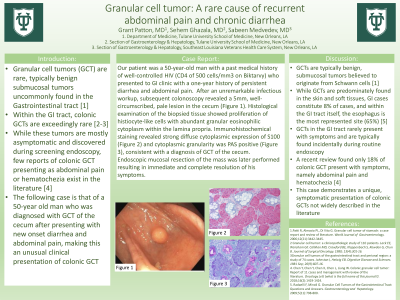 Introduction: Granular cell tumors (GCT) are rare, typically benign submucosal tumors uncommonly found in the gastrointestinal (GI) tract [1]. Within the GI tract, colonic GCTs are exceedingly rare [2-3]. While these tumors are mostly asymptomatic and discovered during screening endoscopy, few reports of colonic GCT presenting as abdominal pain or hematochezia exist in the literature [4]. We present a case of a 50-year old man who was diagnosed with GCT of the cecum after presenting with new onset diarrhea and abdominal pain, making this an unusual clinical presentation of colonic GCT.

Methods: Our patient was a 50-year-old man with a past medical history of well-controlled HIV (CD4 of 500 cells/mm3 on HAART therapy (on Biktarv)) who presented to GI clinic with a one-year history of persistent diarrhea and abdominal pain. After an unremarkable infectious workup, subsequent colonoscopy revealed a 5mm, well-circumscribed, pale lesion in the cecum (Figure 1). Histological examination of the biopsied tissue showed proliferation of histiocyte-like cells with abundant granular eosinophilic cytoplasm within the lamina propria. Immunohistochemical staining revealed strong diffuse cytoplasmic expression of S100 (Figure 2) and cytoplasmic granularity was PAS positive (Figure 3), consistent with a diagnosis of GCT of the cecum. Endoscopic mucosal resection* of the mass was later performed resulting in immediate and complete resolution of his symptoms. Patient had maternal grandmother with colon cancer diagnosed in age less than 60, mother with uterine and breast cancer, and father with lung cancer.

Discussion: Granular cell tumors are rare, typically benign, submucosal tumors believed to originate from Schwann cells [1]. While GCTs are predominately found in the skin and soft tissues, GI cases constitute 8% of cases [5]. Within the GI tract, the esophagus is the most represented site (65%), while colorectal cases are much less common [5]. GCTs in the GI tract rarely present with symptoms and are typically found incidentally during routine endoscopy. While the rarity of these tumors precludes robust data, a recent review found only 18% of colonic GCT present with symptoms, namely abdominal pain and hematochezia [4]. This case is significant as it demonstrates a unique, symptomatic presentation of colonic GCTs not widely described in the literature. 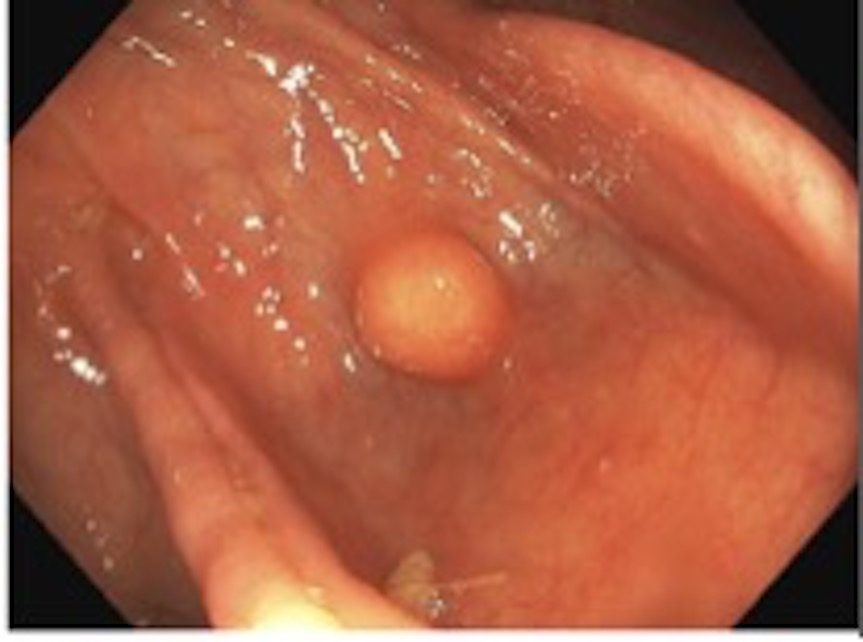 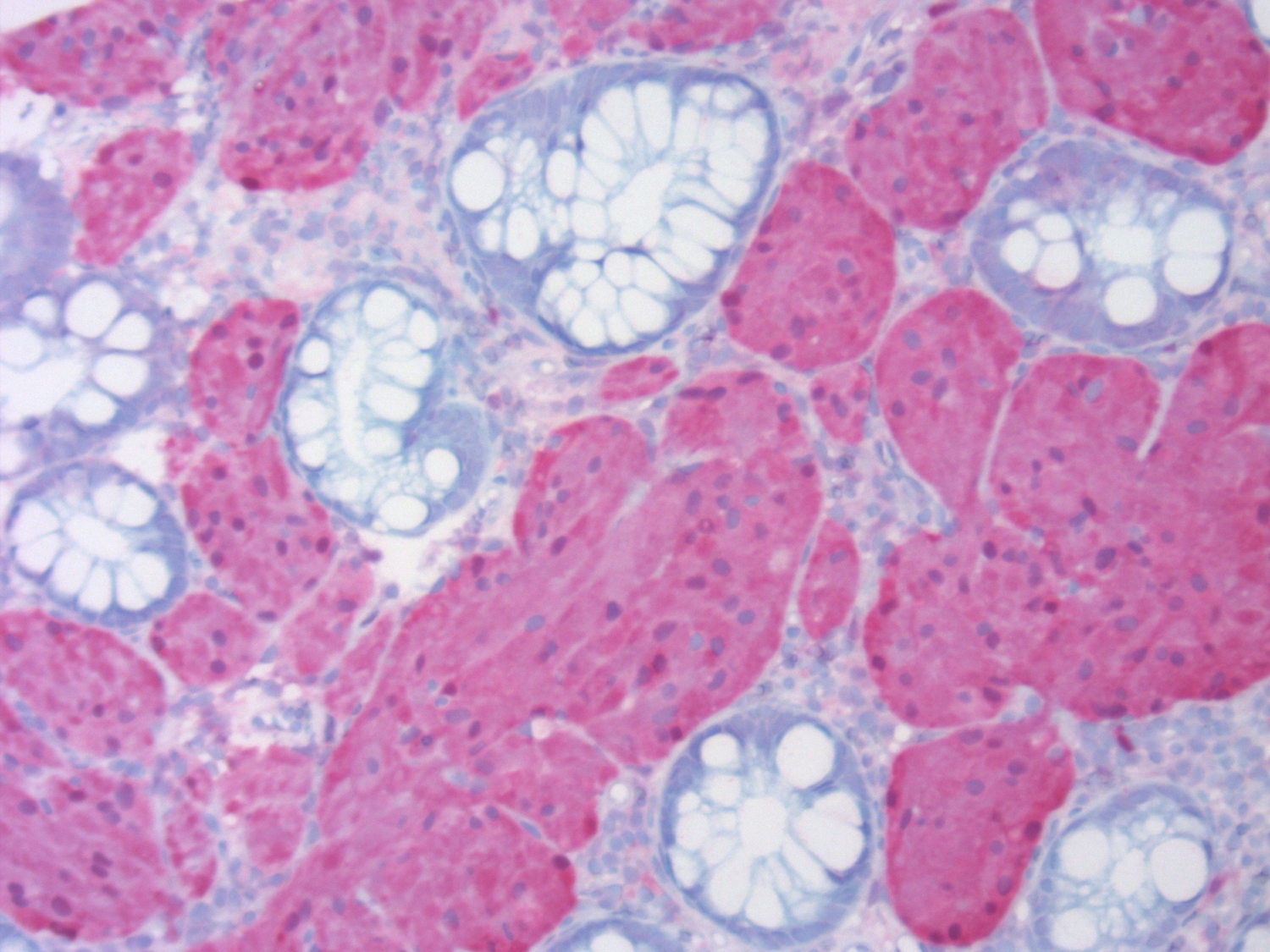 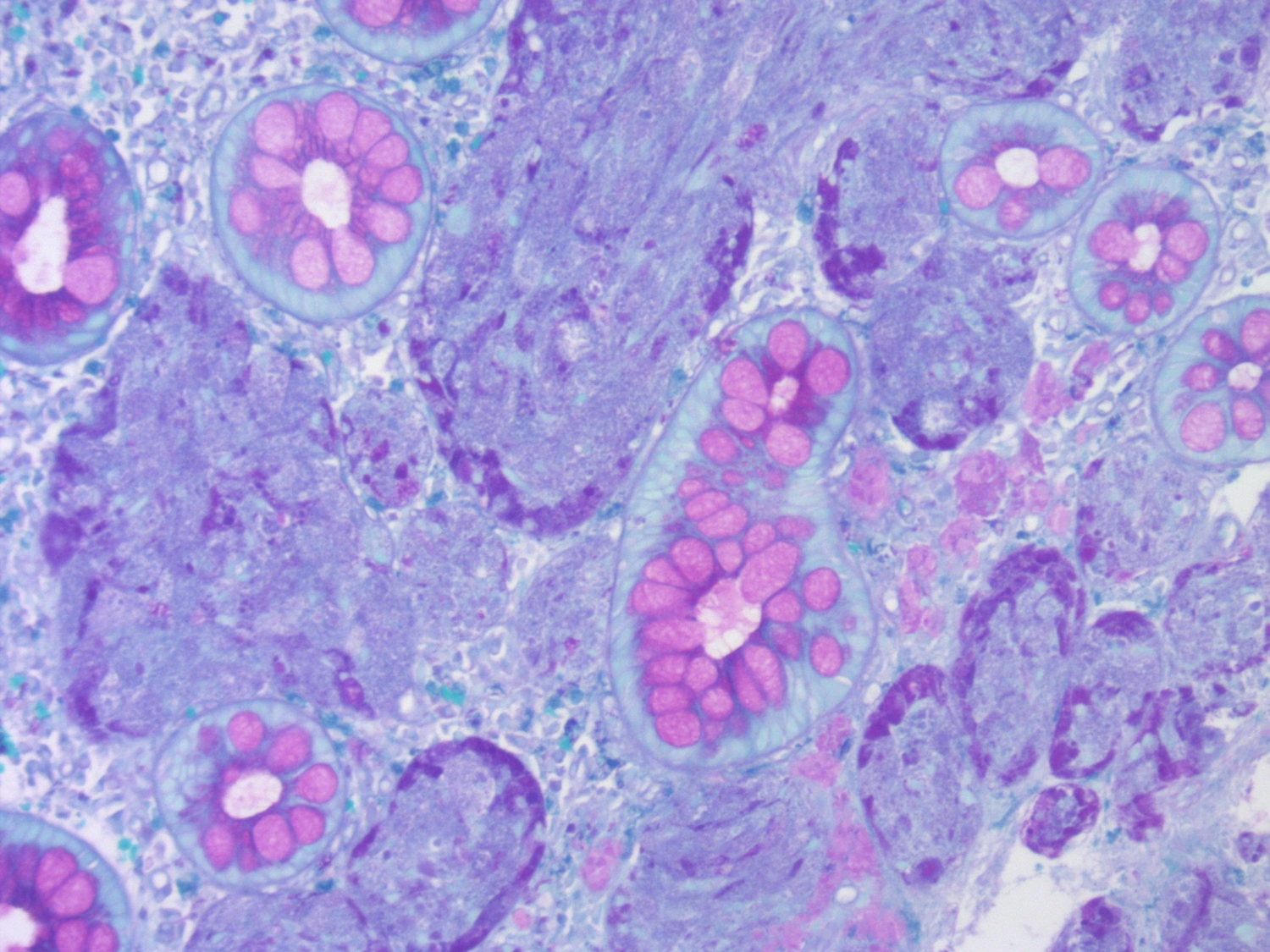