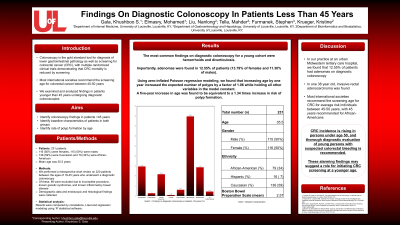 Introduction: Colonoscopy is the gold standard tool for diagnosis of lower gastrointestinal pathology as well as screening for colorectal cancer (CRC), with multiple randomized clinical trials demonstrating that CRC mortality is reduced by screening. Most international societies recommend the screening age for colorectal cancer between 45-50 years. We examined and analyzed findings in patients younger than 45 years undergoing diagnostic colonoscopies.

Methods: We performed a retrospective chart review on 320 patients between the ages of 18-45 years who underwent a diagnostic colonoscopy. Of these, 89 were excluded due to incomplete procedure, known genetic syndromes, and known inflammatory bowel disease. Demographic data, findings on colonoscopy and pathology findings were collected. Results were compared by correlations, t-test and regression modeling using ‘R’ statistical software.

Results: We included 231 patients in the final analysis. 116 (50%) were female, 136 (59%) were Caucasian and 79 (34%) were African-American, and mean age was 35.5 years. The most common indication for colonoscopy was gastrointestinal bleeding (42.9%). Endoscopic visualization quality was evaluated by Boston Bowel Preparation Scale, with a mean score of 2.57. The most common finding on colonoscopy was hemorrhoids in 92 patients (39.83%). Adenomatous polyps were found in 29 patients (12.55%), of which 16 were female (13.79% of total females) and 13 were male (11.30%). One 38 year old African American male with no family history was found to have invasive rectal adenocarcinoma. Other findings included hyperplastic polyps in 34 patients (14.72%), newly diagnosed Crohn’s disease in 7 (3.03%), diverticulosis in 33 (14.29%) and arterio-venous malformations in 5 (2.16%). Using zero-inflated Poisson regression modeling, we found that increasing age by one year increased the expected number of polyps by a factor of 1.06 while holding all other variables in the model constant. A five-year increase in age was found to be equivalent to a 1.34 times increase in risk of polyp formation.

Discussion: The most common findings on diagnostic colonoscopy for a young cohort were hemorrhoids and diverticulosis. Importantly, adenomas were found in 12.55% of patients (13.79% of females and 11.30% of males), which is about half the adenoma detection rate expected for patients older than 50 years. In one 38 year old, invasive rectal adenocarcinoma was found. These alarming findings may suggest a role for initiating CRC screening at a younger age.